After Tencent upgraded its wealth management platform on Saturday, analysts said that competition between Tencent and Alibaba will help advance the development of Chinese money market funds to meet the public's short-term investment needs, although it may hurt the growth of long-term investment products. 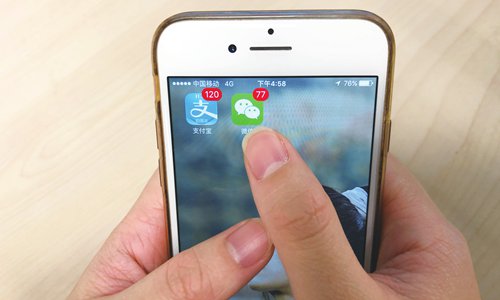 A view of Alipay and WeChat apps on a mobile phone (Photo: Global Times)

Chinese internet giant Tencent announced on Saturday a new feature called Lingqiantong, which can be seen on its WeChat wealth management platform Licaitong. The feature started open testing  on the same day for most users.

Lingqiantong enables users to put money into WeChat, either in money market funds or for use in mobile payments.

The connection with Tencent's mobile payment platform has turned the money management platform Licaitong into a strong competitor of Yu'ebao, the money market fund launched in 2013 by Alibaba's financial affiliate Ant Financial.

Xiang Ligang, chief executive of Chinese telecoms industry news website cctime.com, told the Global Times on Sunday that Tencent has stepped up efforts to shift its revenue dominance from online games to other internet businesses, and this latest move should benefit the group's growth.

Tencent's reported rise in profit in the third quarter showed the advantages of its huge user base. Its new and growing businesses such as mobile payments and cloud services have offset the impact of the regulator's continuing ban on new internet games, according to Xiang.

According to Tencent's third-quarter financial report released on Wednesday, its net profits in the July-September quarter rose to 23.3 billion yuan, up 30 percent year-on-year.

Licaitong was rolled out in January 2014, a year later than Yu'ebao.

Tencent said its fund management platform is expected to rapidly reach 1 trillion yuan after being fully promoted, the report noted.

"It simplifies the user's operation, and the security performance of the platform has remained good," Xiang added. "The 1 trillion yuan goal is likely to be achieved rapidly."

While analysts agreed that the positive competition between Yu'ebao and Licaitong could help to meet consumers' short-term financing needs and advance the development of money market funds in China, some expressed concern that the development of the long-term investment fund market would be hurt.

"This might stimulate further 'wild growth' of money market funds, but China needs to see sound development of long-term investment products," Dong Dengxin, director of the Finance and Securities Institute at Wuhan University of Science and Technology, told the Global Times on Sunday.

The positive competition between the two internet giants is highly likely to attract more short-term liquidity into their respective investment products, Dong said.

"At the macro level, what China needs the most is innovation in stock equity funds to facilitate the balanced development of long-term investments products," Dong said.