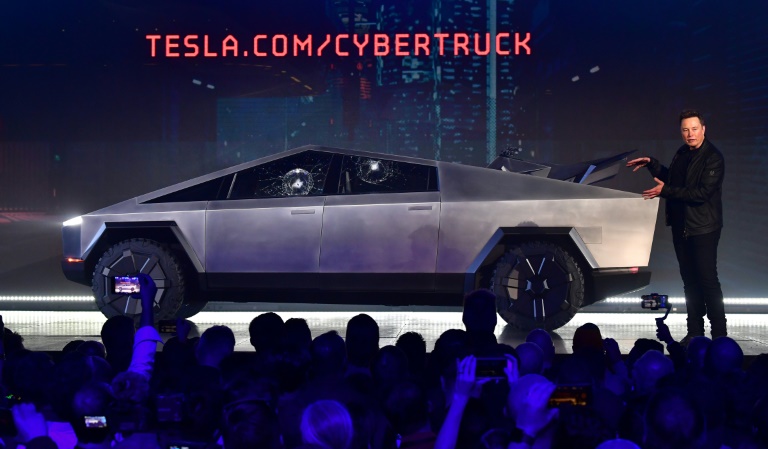 Tesla and Ford were in a virtual stare-down on Tuesday in the macho truck world, each claiming their electric pick-up was strongest.

Dueling tough talk was exchanged on Twitter after Tesla chief executive Elon Musk posted a video of a freshly-unveiled "Cybertruck" trouncing a Ford F-150 in a tug-of-war.

The video had logged nearly 13 million views at Twitter as of early Tuesday in California, and been "retweeted" more than 110,000 times.

In the clip, a wedge-shaped Cybertruck drags an F-150 uphill, with smoke coming from Ford's rear wheels as it tries to go downhill.

"Hey @Elon, send us a Cybertruck and we will do the apples to apples test for you," Madra tweeted.

"Bring it on," Musk fired back.

Musk's boasts ignited online debate, with Ford defenders arguing the F-150 was at a disadvantage for reasons that included lacking a load to enhance rear-wheel drive traction and that the Cybertruck may have gotten a head-start.

The billionaire Tesla co-founder floundered on stage in California last week when the vehicle's armored glass windows cracked in a demonstration intended to prove their indestructible design.

The industrial-looking Cybertruck is covered in the same steel alloy Musk plans to use for his SpaceX Starship rocket and will be able to go from 0 to 100 kilometers (62 miles) per hour in about three seconds, the Tesla chief executive claimed in his presentation.

No date has been given for its release, but analysts said it would not be ready before the end of 2021 at the earliest.