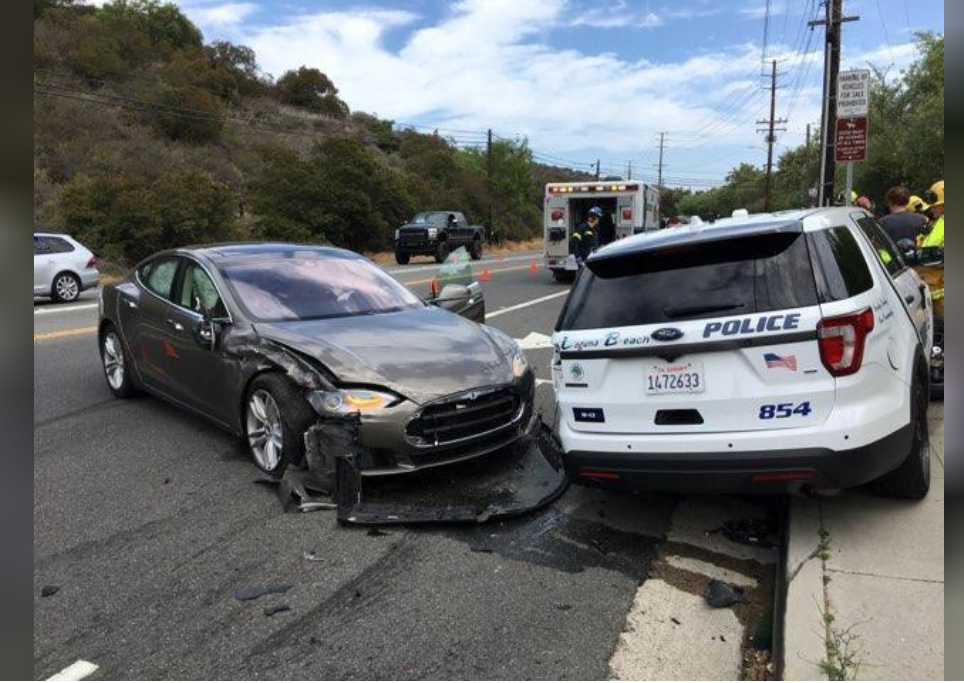 The driver of a Tesla Inc Model S crashed into an unoccupied, parked police vehicle in Laguna Beach, California, on Tuesday and the driver told investigators the Tesla was in “Autopilot” mode at the time, police said.

The driver suffered minor injuries, Laguna Beach Sergeant Jim Cota said, who posted photos of the crash scene showing extensive damage to the front end of the Tesla and the rear side of the police vehicle.

Autopilot is a semi-autonomous technology that the company says is a form of advanced cruise control.

“Tesla has always been clear that Autopilot doesn’t make the car impervious to all accidents,” the company said in a statement after the accident and could not immediately confirm the driver’s report that the vehicle was in Autopilot mode.

Several crashes and fire incidents involving Tesla vehicles this year has been a near constant headache for Chief Executive Elon Musk, who boasts that his company’s vehicles are among the safest in the industry.

Earlier this month, the US National Highway Traffic Safety Administration (NHTSA) said it was sending a team to investigate the crash of a Tesla vehicle in South Jordan, Utah. The driver was traveling at 60 miles (97 km) per hour when the Model S smashed into a fire truck stopped at a red light, according to police.

Police in Utah said data from Tesla showed that the driver enabled Autopilot about 1 minute and 22 seconds before the crash. The report said she took her hands off the steering wheel “within two seconds” of engaging the system and then did not touch the steering wheel for the next 80 seconds, until the crash happened.

The National Transportation Safety Board is also probing four Tesla crashes that have occurred since last year, including three under review by NHTSA.

Tesla’s Model S owner’s manual warns some Autopilot functions “cannot detect all objects and may not brake/decelerate for stationary vehicles or objects especially when traveling over 50 mph (80 kph)” and when a vehicle ahead of the driver “moves out of your driving path and a stationary vehicle or object is in front of you.”