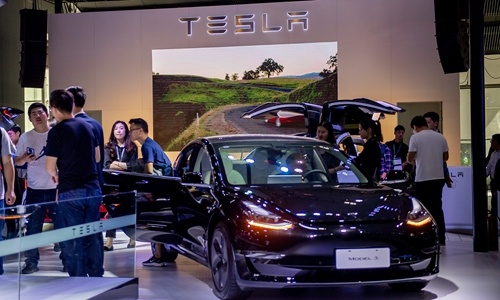 A Tesla Model 3 displayed at the Guangzhou Autoshow on November 22 (Photo: VCG)

Tesla plans to produce charging piles for electric vehicles in Shanghai as it seeks to expand its market share in China, following the establishment of its Gigafactory, according to media reports. Experts said that the expansion will support the growth of its Chinese business and stimulate sales of its new-energy vehicles.

A new plant is expected to be completed in February, and will start making chargers in 2021, with annual output of 10,000 chargers, according to a Reuters report. The cost is estimated at 42 million yuan ($6.4 million) from Tesla.

Independent market analyst Wu Shuocheng told the Global Times that Tesla's plan was inspired by the massive potential in China for electric vehicles (EV), which have received substantial government policy support and subsidies.

In March this year, charging piles were listed as one of the seven sectors under the government's "new infrastructure" program, alongside 5G base stations, big data and artificial intelligence.

"More charging piles for Tesla vehicles can improve customers' user experience and the company's brand image," said Wu. "This will increase its competitiveness amid challenges from domestic new-energy vehicle bands."

In October, the Shanghai plant started to export Model 3s to Europe. However, Wu said that a factory for charging piles would more likely meet demand in China rather than overseas.

"One major obstacle for developing the EV industry anywhere is the lack of charging piles," Wu said. "By building more chargers in China, Tesla can further stimulate vehicle sales here."

"The number of NEV chargers in China, including those built by Tesla and State Grid, is still far from enough to dispel people's worries about charging inconvenience. But it will gradually ease with the new development of supporting facilities," Wu said.