Tesla has become a clear beneficiary of China's opening-up amid the trade war, as its made-in-China Model 3 vehicles are driving into the Chinese market at an unprecedented speed. 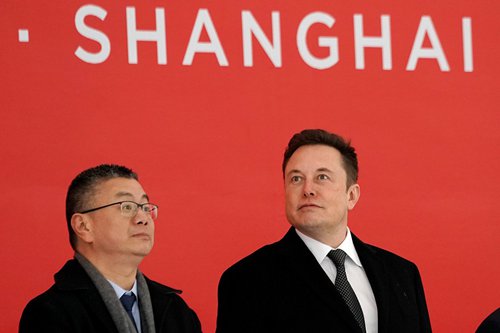 No one would have expected one year ago that Tesla would build its Gigafactory 3 in Shanghai from scratch and deliver locally produced Model 3 sedans to customers in such a short period. Only a manufacturing power like China can make such a speed miracle happen, which is the key to China's allure for foreign investment.

In the past, much has been said as to how attractive the huge Chinese market is to foreign companies, which is undoubtedly true. In the case of Tesla, China has become Tesla's second-largest market globally. According to the company, its sales in China surged 41.8 percent year-on-year to $1.47 billion during the first half of 2019. It also has an ambitious goal for the Chinese market, with an annual production capacity target of 500,000 cars at its Shanghai factory, equivalent to about 50 percent of new-energy car sales in China.

However, the market is not the only reason for Tesla's China choice - Tesla needs more than just a market. Construction and production efficiency also matters, especially for Tesla, which has seen output of the mass-market Model 3 cars stuck around the 5,000-per-week rate in its US factory, affecting its profitability. This is why it is believed that the first deliveries of made-in-China Model 3 vehicles on Tuesday will mark a start for the Chinese market to inject new impetus into Tesla in terms of both market expansion and financial viability.

There is no other country in the world where Tesla can move forward so efficiently. In India, it may take a year to lay the foundation for a factory. In Germany, one year may not be enough for negotiations with unions.

Moreover, Tesla is the first wholly foreign-owned automaker in China since the central government removed ownership restrictions for foreign automakers in 2018. Against the backdrop of the US-China trade war, Tesla, as a high-profile US company that represents one of the emerging industries, has always received the full support of the local government, an important factor for it to start production and deliver cars so quickly.

In addition, China has the world's most comprehensive and cost-efficient supply chain for the new-energy vehicle sector, which is also essential for Tesla's production in Shanghai.

In short, Tesla's Gigafactory 3 is a showcase of not only the speed and efficiency of China's manufacturing strength, but also the government's support for emerging industries. With market and efficiency advantages, China still holds great appeal for foreign investment.