Tesla on Friday released its long-anticipated, made-in-China Model Y series in the Chinese market, at a price much lower than Tesla’s official Chinese website had said it would cost. 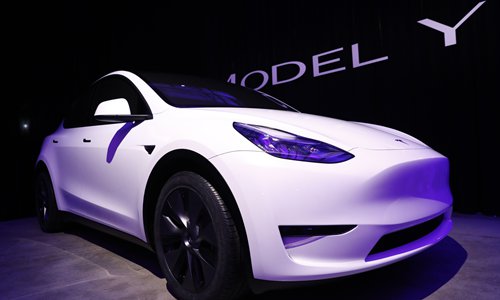 The new Tesla Model Y sits on display during an unveiling event in Hawthorne, California in 2019. Photo: VCG

According to Tesla’s website, there are two versions of the Model Y series. One is a performance version and the other is a long-range version. The two versions range in price from 339,900 yuan ($52,028) to 369,900 yuan.

The performance version had been previously expected to cost 535,000 yuan while the long-range version was to cost 488,000 yuan, according to sina.com.

The new prices – as much as 165,100 yuan less than expected – caused hot discussions on Weibo, China’s Twitter-like social media platform, with some saying the prices show Tesla is a good company, while others saying the move is likely to create greater competition for Chinese domestic electric carmakers.

In 2019, Tesla built its first overseas gigafactrory in East China’s Shanghai. In January 2020, the company delivered its first batch of made-in-China Model 3 series, while the company announced the start of its Model Y project in the factory.

Tesla’s cutting-edge technologies and fast construction of its factory in China has attracted a lot of attention, but in the meantime, several safety incidents related to Tesla cars have been reported in recent years. The latest one was a video of a model 3 accelerating in a tunnel while the driver’s foot was “off the accelerator.”

Tesla on Saturday released the result of its probe, saying after analysis and onsite investigation, the acceleration was found to be due to the slope of the road which caused what it called geopotential energy. The company said it is in talks with the car owner.