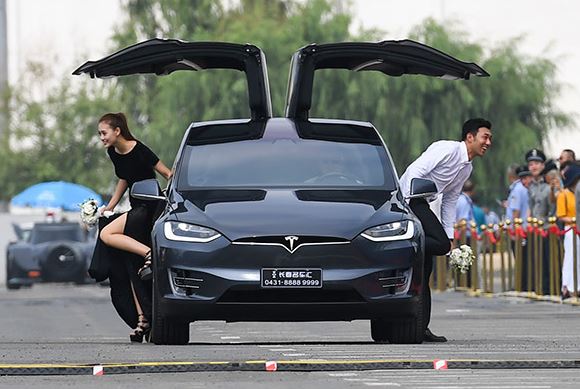 Tesla announced on Tuesday that it has launched a three-year interest-free financing service for car purchasers in Beijing, while also allowing consumers in the capital to rent license plates for free for up to three years.However, the new measures have sparked controversy on social media over whether Tesla has the legal authority to conduct a license plate rental business in China. Some netizens suggest that China's transport authorities could investigate this offer in retaliation for the US crackdown on China's technology rise. In the latest post of Tesla on its official Weibo account, the company said the interest-free service could save consumers 53,000 yuan ($7,673), and the free license plate rental service could save buyers 60,000 yuan. Under the three-year plan, if consumers want to buy a Tesla Model 3 Long Range Dual Moto version, "they only need to pay 120,000 yuan as a deposit plus a rental fee of 11,700 yuan every month," the post continued.Industry insiders said that the measures signaled the carmaker is betting big on Chinese market despite the trade war and fierce competition from Chinese electric start-ups. But some consumers and netizens do not seem to buy the explanation for the policies, with some even reporting and forwarding Tesla's announcement to the official Weibo account of the Beijing Municipal Commission of Transport (BMCT)."It's a big discount, but are you sure your license plate rental service is not on the edge of the law? This is a violation of policy," asked a Weibo user named Yuanlaiyoushiyitian."[China] has been pushed to this point amid an escalation of the trade war, could the BMCT take notice of this issue and take measures?" another netizen suggested.The US automaker has not responded to an interview request by the Global Times as of press time. Meanwhile, Tesla's frequent sales adjustments have also tainted its image among Chinese consumers. "There may be another huge discount in the near future, so I prefer to buy homegrown electric cars over US brands," a 20-something Beijing resident surnamed Li told the Global Times.On Friday, Tesla announced that the Model 3 built in China will be sold from 328,000 yuan, which is about 13 percent cheaper than its previous entry-level option, techcrunch.com reported.