Tesla and SpaceX founder Elon Musk was busy this week - from a brisk dance in a Shanghai rain to commissioning a $2 billion Gigafactory, holding a meeting with Chinese Premier Li Keqiang, and enjoying a hotpot meal in Beijing's Guijie gourmet street. 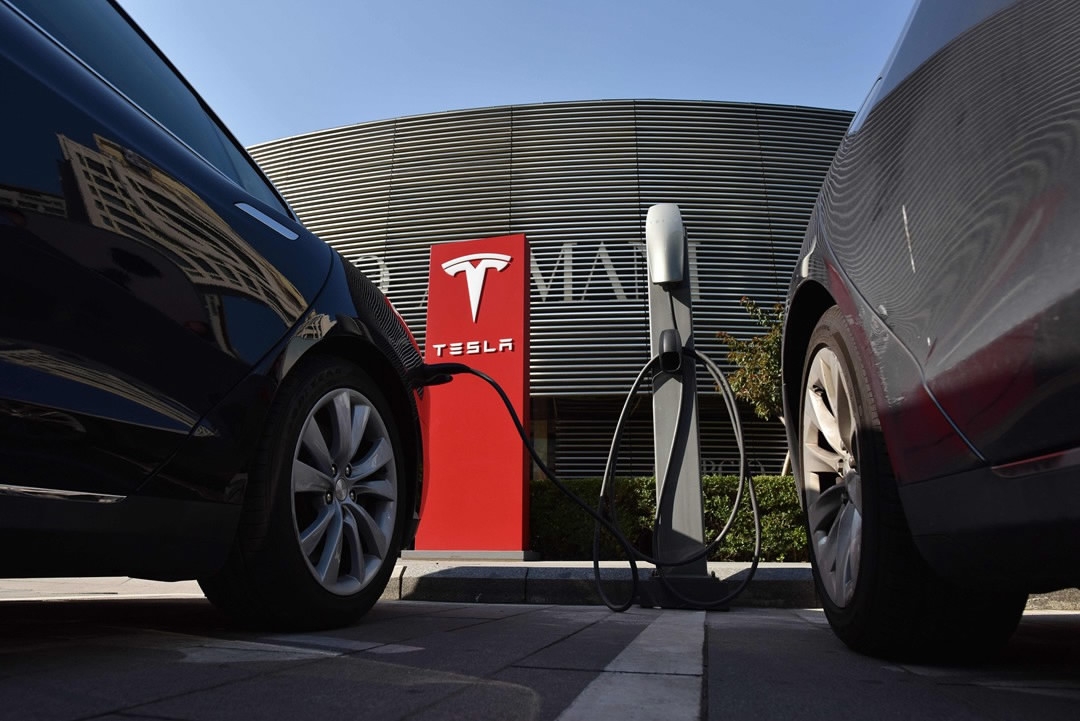 A Tesla charging station outside a shopping mall in Beijing. (Photo: VCG)

As Musk continues his trip in China, the US electric carmaker was identified by the Ministry of Commerce (MOFCOM) on Thursday as a witness to and beneficiary of China's further opening-up efforts.

More foreign automobile enterprises are welcome to invest in China to enjoy the country's development opportunities, said the MOFCOM.

The Ministry of Foreign Affairs also applauded Tesla's business in the nation, noting it shows China's further reform and opening-up is being put into practice and confirms foreign companies' confidence in China and its economic growth.

Lu noted that it only took six months from the signing of the contract for the Tesla project to the start of construction, which shows the seriousness of China's efforts to pursue further reform and opening-up.

The ministries' comments came after a meeting between Premier Li and Musk on Wednesday at the Hall of Purple Light (Ziguangge) in the Zhongnanhai leadership compound in Beijing.

During the meeting, Li told Musk that he hoped Tesla could become "a participant in China's further advancing reform and opening-up and promoter of the stability of Chinese-US relations."

As the first wholly foreign-owned new-energy vehicle project in China, Tesla's Gigafactory is expected to make 250,000 electronic cars annually in the first phase of production.

It is notable that the meeting was Li's first foreign affairs event in 2019.

On the website of the Chinese government, the story ran under the title "Tesla parked outside Hall of Purple Light; Li Keqiang's foreign affairs activity in the year's start breaks new path."

It is rare that the central government website puts the name of a foreign enterprise at the beginning of the title of its news release.

Another Chinese leader Musk has met with was Vice President Wang Qishan in July 2018, according to a tweet by Musk.

"Even amid the headwinds of the China-US trade dispute, the coming of Tesla shows China's determination and unswerving stance toward high-quality opening-up," said Zhang Monan, research fellow with the China Center for International Economic Exchanges.

"This is just a prelude, with promises of more to come," Zhang told the Global Times on Thursday, noting a shift is taking place as China bids farewell to its old model of attracting foreign investment with low-cost production factors such as cheap land and labor, and favorable policies.

"China's new round of opening-up won't be limited to specific companies or big names. It offers equal treatment to all multinationals that can provide the products and services needed by Chinese consumers, who are in the middle of a consumption upgrade," Zhang said.

The new round of opening-up also addresses multinationals' concerns on technology transfers, ownership restrictions, equal treatment and market access, according to Zhang.

In the first three quarters of 2018, foreign direct investment in Chinese high-technology manufacturing surged more than 22.5 percent year-on -year, compared with a mere 9.6 percent rise for general manufacturing, according to the MOFCOM.

Musk told Li that he hopes to make Tesla's Gigafactory a model for the world, and he also hopes to visit China frequently.

"We could issue you a Chinese 'Green Card'," Li said, according to the government website.

The world-renowned carmaker has set up 15 new companies and dozens of subsidiaries in the Chinese mainland, with total registered capital amounting to a staggering $900 million, financial news website 36kr.com reported on Thursday.

In October 2018, Germany's BMW announced plans to take control of its main joint venture in China, becoming the first global carmaker to benefit from China's relaxation on ownership restrictions.

Moves in China by such global top brands as BMW and Tesla also show the attractiveness of the Chinese market to high-technology companies, which can't survive without reaching industrial scale - and China is just the place to achieve economies of scale, Zhang said.

However, there are challenges for Tesla in China's new-energy vehicle market.

Only if Tesla boosts output in China, ensures its cars' quality, cuts prices and develops its sales network in China by such means as providing test drives and on-time deliveries, can it succeed in the end, Mei Songlin, a senior industry analyst, told the Global Times on Thursday.

"If the price of its Model 3 cars could be close to the US price, I believe the company will make great strides in the Chinese market and beat its rivals," Mei added.

"Chinese funding might be part of the loans that finance the Shanghai Gigafactory," Mei said.