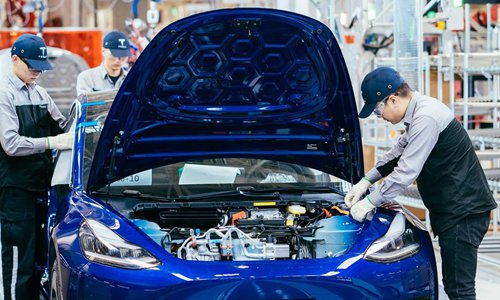 Workers are busy at production line in Tesla Gigafactory 3 in Shanghai. (Photo: Courtesy of Tesla)

Tesla is producing full vehicles on a trial basis from body to paint at the Gigafactory 3 located in Shanghai, the US-based carmaker said in a filing it sent to the Global Times on Thursday.

"We have cleared initial milestones toward our manufacturing license and are working toward finalizing the license and meeting other governmental requirements before we begin ramping up production and delivery of vehicles from Shanghai," Tesla said in the statement.

The Gigafactory 3, built in just 10 months, was about 65 percent less expensive to build than Tesla's Model 3 production system in the US, the company disclosed. Tesla predicted that China could become the largest market for the Model 3.

Tesla produced 79,837 Model 3s in the third quarter this year, up 10 percent on a quarterly basis and 50 percent on a yearly basis. It disclosed that the Shanghai plant's installed annual capacity will be 150,000 Model 3s, compared with 350,000 at its plant in Fremont in the US state of California.

The sooner Tesla launches locally made cars in the Chinese mainland, the easier it can occupy a leading position in China's new-energy vehicle (NEV) market, with Tesla's advantages in costs, logistics, tariffs and capacity as the only overseas-invested and wholly owned car factory in China, Zhang Zhiyong, founder of the Beijing-based car data service provider iwenfeng.cn, told the Global Times on Thursday.

This is becoming more urgent for Tesla as many overseas car companies have unveiled new electric cars recently. "It can be expected that a contest will emerge next year in the Chinese electric car market among foreign brands," Zhang said.

Tesla's revenue amounted to $6.3 billion in the third quarter of 2019, down 1 percent on a quarterly basis and down 8 percent on a yearly basis, Tesla said in its financial statement. The revenue figure was mostly in line with market expectations.

Tesla also reported a profit of $1.91 per share, compared with market expectations of a 20-cent loss per share, according to media reports.

According to Zhang, Tesla's business improved as its sales in the Chinese market continued to grow and its initial investment, such as that made in the Gigafactory 3, declined.

He was also optimistic about Tesla's business prospects in China after it starts selling the locally made cars. "In terms of brand effect and market appeal, Tesla does not have another electric car rival," he said.

"In general, China's NEV market will also expand with the launch of high-end products like Tesla's cars, as it will help dispel consumers' worries about buying electric cars," Zhang said.