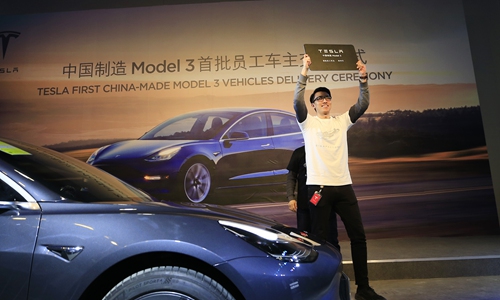 "We will postpone the delivery of cars which were scheduled to be delivered after the Spring Festival holidays or in early February," Tao wrote. She didn't disclose a revised delivery time.

An individual close to Tesla has confirmed with the Global Times that Tesla has been asked by local authorities to temporarily shut down its Shanghai-based Gigafactory 3 over worries about the coronavirus infection. He said he didn't know when the factory will resume production.

Tesla's Shanghai plant might kick off production next Monday, the earliest possible date for Shanghai-based enterprises to resume work after the Spring Festival holidays, according to urgent regulations of the Shanghai Municipal Government to prevent spread of the coronavirus.

However, one expert predicts Tesla is unlikely to see "efficient production" for the whole month of February, based on mixed factors.

"Logistics can't be restored immediately as the epidemic is still developing without showing clear signs of abating, while many non-local workers will have to isolate themselves for days before resuming work," veteran car industry expert Feng Shiming told the Global Times.

Those factors, plus the expectation that the personal domestic buying capacity will largely dwindle under economic pressure from the epidemic, mean Tesla's whole-year production and sales might be slashed by around half to 80,000 for 2020, Feng said.

"It will be an overwhelming blow to Tesla's performance in China, and a negative factor in the company's global performance. It sells about one-fifth of its cars in China," Feng said.

He predicts Tesla will make up for the manufacturing halt by increasing imports and recruiting more staff at a later date.

"We are mapping out various plans," Tao wrote.

Overall, the car industry in China will face a winter chill in 2020 as a result of the epidemic, Feng said, estimating the country's overall car sales will slump by around 50 percent on a yearly basis.