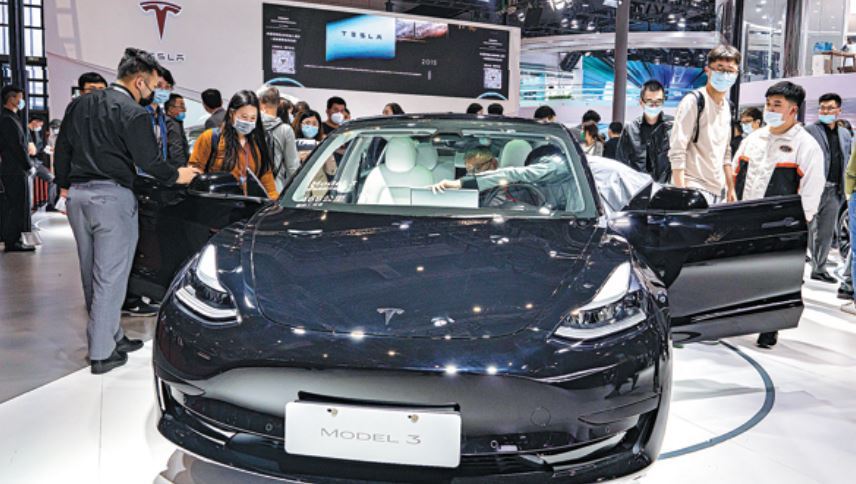 Visitors check out a Tesla Model 3 in an exhibition center in Shanghai's Qingpu district in April. (Photo: China Daily)

It is recruiting engineers for such functions as design, styling, software and vehicle engineering as well as test and validation.

The Shanghai facility will be Tesla's first research and development center outside of the US.

"The goal of Tesla's team in China is to design, develop and produce new vehicle models and products with Chinese cultural elements in China and sell them globally," said Tesla in the recruitment post.

Tesla's China gigafactory, which is also located in Shanghai, started production in late 2019, and was its first vehicle manufacturing facility outside of the US.

The plant, which now has an annual production capacity of 450,000 vehicles, is producing Model 3 and Model Y vehicles. In a tweet in late July, Tesla CEO Elon Musk praised its Shanghai plant team, saying they have done "amazing work".

Tesla said the Shanghai plant has become a major producer of Tesla models for global markets.

"Due to strong US demand and global average cost optimization, we have completed the transition of Gigafactory Shanghai as the primary vehicle export hub," said the carmaker in July.

Tesla exported almost 30,000 vehicles in the second quarter from its Shanghai plant, according to the China Passenger Car Association. Its global deliveries in the quarter hit a record number of over 200,000 vehicles.

Cui Dongshu, secretary-general of the association, said Tesla's total exports from China could reach 100,000 this year.

Tesla is the best-selling electric carmaker in China. Sales of its China-made vehicles totaled 161,743 units in the first half of the year, according to the China Passenger Car Association.

China has been the world's largest NEV market since 2015, with over 6 million such vehicles on its streets by the end of June.

Statistics from the China Association of Automobile Manufacturers show that sales of electric cars, plug-in hybrids and fuel cell vehicles totaled over 1.2 million from January to June this year, up over 200 percent from the same period last year.

The CAAM estimates that their total sales in China this year could reach 2.4 million, up from its previous estimate of 1.8 million units.