BUSINESS Tesla to set up plant in Shanghai for EV chargers

Tesla to set up plant in Shanghai for EV chargers

Tesla Inc is planning to set up a new manufacturing facility in Shanghai for making electric vehicle chargers, the US company said in a document submitted to local authorities. 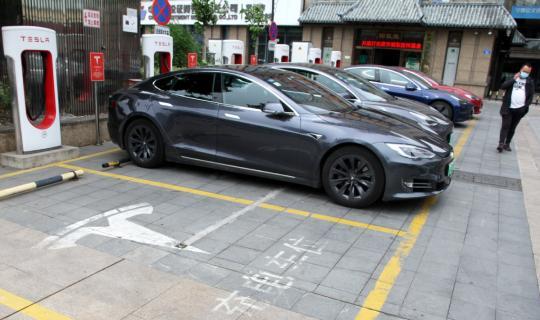 Tesla plans to invest 42 million yuan ($6.4 million) in the new charger factory, according to a document published on an environment-related information disclosure website in Shanghai seen by China Daily.

Spread over an area of 4,841 square meters, the plant, set to be completed by February 2021, will have an annual production capacity of 10,000 chargers, according to the document. The site is located adjacent to the company's car plant in Lingang Special Area of Shanghai Pilot Free Trade Zone, where its Model 3 vehicles are being mass-produced.

In a written statement to China Daily on Thursday, Tesla also said it expects to build and open 650 supercharger stations in China, with over 5,000 superchargers covering 250 cities by the end of 2020.

The statement added that it will build a new R&D center near Shanghai's Gigafactory 3 in addition to an existing one in Beijing, to help "comprehensively advance Tesla's localization strategy in China".

Tesla, on course to deliver its Model Y sport utility vehicles in 2021 in China, currently imports the charging stations from the United States.

"(This) is showcasing to the world not only the speed and efficiency of Chinese construction, but also the quality of Chinese manufacturing,"Zhu Xiaotong, global vice-president and head of Tesla in China, said during a ceremony in Shanghai.

In an interview with China Daily in May, a Tesla China technology expert said the company is looking to more than double the number of its superchargers in China within this year.

"Now that the locally-manufactured Model 3 becomes more affordable, we anticipate a rise in the number of car owners who don't have fixed parking spaces for regular vehicle recharging. That's why we want to drastically increase the number of superchargers," said the expert who declined to be named.

Tesla's charging stations in China are mostly located in city centers and along the exits of expressways. The EV maker is also developing shared charging facilities at residential complexes.

A Deloitte projection last year suggested that battery-operated electric vehicles will account for 90 percent of overall EV sales in China in 2030, with a sales volume of more than 17 million vehicles. Around 60 percent of premium battery-powered EV owners said a range of more than 400 kilometers can meet their daily needs. Improved charging infrastructure was highlighted among growth drivers, along with government subsidies and improved battery performance, said Zhou Lingkun, Deloitte China's automotive sector leader.

"Ongoing technological innovation will drive the creation and adoption of increasingly disruptive battery and charging technologies," he said. "For example, China and Japan are cooperating on a fast-charging solution to bring charging time down to 10 minutes or even shorter by 2020."

China boasts the largest number of electric vehicle charging facilities in the world-over 1.32 million by June, according to the National Energy Administration. It is also looking to add around 600,000 more this year, thanks to a stimulus initiative to boost "new infrastructure" construction, the National Reform and Development Commission said in April.