The severe weather gripping the US state of Texas will worsen a global shortage of chips, after power outages forced several semiconductor manufacturing plants in the city of Austin to shut down.

South Korea's Samsung Electronics Co, one of the world's biggest chipmakers, as well as Dutch chip company NXP and Germany-based Infineon, two key suppliers to the automotive industry, all shut down their Austin plants. 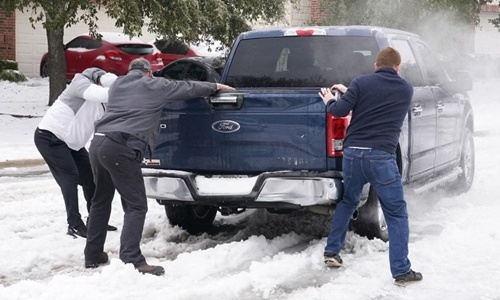 Residents help a pickup driver get out of ice on the road in Round Rock, Texas on Wednesday after a winter storm. Millions of people were still without power. Photo: AFP

Cui Dongshu, secretary-general of the China Passenger Car Association, told the Global Times on Thursday that the developments would have a limited impact on Chinese carmakers, because China imports the majority of its auto chips from Europe.

A global shortage of vehicle chips persists, however, leaving some automakers around the world with no choice but to shut down assembly lines. Industry observers warned that the Texas storms may exacerbate the global shortage and result in shortfalls until possibly mid-year.

IHS Markit on Tuesday predicted that the production of 1 million vehicles would be delayed in the first quarter due to semiconductor shortage.

Responding to the shortage, the Biden administration has held meetings with auto companies and suppliers to identify chokepoints and asked companies to work cooperatively to tackle the problem, including telling US embassies to identify how foreign countries and companies that produce chips can help resolve the global shortage, Reuters cited a White House spokeswoman as saying on Wednesday.

In late January, TSMC said that it was expediting critical automotive products and addressing chip supply challenges affecting the automotive industry as a "top priority."

Xu Haidong, vice chief engineer of the China Association of Automobile Manufacturers, told the Global Times on Thursday that the global chip shortfall might be eased in the third or the fourth quarter, depending on whether the supply chains recover from the pandemic fallout.

However, Chinese chip production capacity for the vehicle sector won't expand much in the short term as it is still heavily reliant on imports, said Xu.

According to IC Insights, the top five wafer capacity leaders in the market account for 54 percent of all global capacity. They are Samsung (14.7 percent), TSMC (13.1 percent), Micron (9.3 percent), SK Hynix (9 percent) and Kioxia/WD (7.7 percent).

China is accelerating semiconductor R&D to ease reliance on foreign companies, and IC Insights predicted that the total installed capacity of the Chinese mainland would surpass that of South Korea in 2022 and rank second globally.