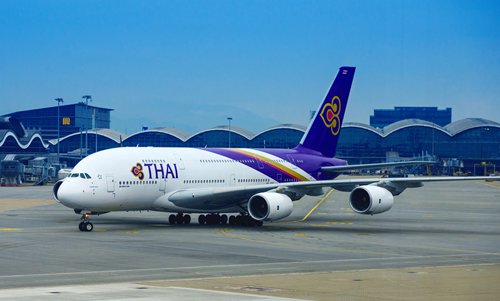 A view of an A380 aircraft owned by Thai Airways (Photo:IC)

Struggling national carrier Thai Airways International PCL is pinning hopes of a revival to its 1990s heydays on a new leadership team, jet purchases and improving its brand as tourism booms in the region.But the new president and chairman taking the helm are political appointees without aviation experience and several executives told Reuters that the airline needs to adjust to a market where the good times of having a near-monopoly at home are long over.Challenges for the new team include cutting costs, managing a mixed fleet, coping with loss-making subsidiaries as well as healing long-time rifts between government-appointed management and airline veterans.Thailand has been the beneficiary of a boom in tourist arrivals, particularly from China, but as foreign airlines like Qatar Airways and China Eastern Airlines have rushed to add flights, Thai Airways has reported annual losses for four of the last five years."Thai Airways did not adapt quickly enough and competes in one of the world's toughest industries," said Piyasvasti Amranand, former president of Thai Airways.The structure of state enterprises in Thailand slows decision-making because the carrier needs to seek approval from many agencies for decisions, he said.Other national carriers in the region where the government takes an active role have had similar struggles - Malaysia Airlines, for example, has yet to return to profitability after two disasters in 2014 while Garuda Indonesia last week replaced its latest CEO after 17 months.In contrast, Singapore Airlines, majority-owned by state investor Temasek, and government-controlled Air New Zealand, are being managed in a hands-off manner and are profitable.On paper, prospects are good for Thai Airways. Air traffic is booming in Asia - the International Air Transport Association forecast profits of Asia-Pacific airlines to increase by 8.4 percent from last year to $9 billion this year.Also, Thailand expects to have welcomed a total of 37.5 million visitors by year-end, up 6 percent from 2017, with most travelling by air.Under new managementBut the new president of Thai Airways, Sumeth Damrongchaitham, who started the job this month after an 18-month search, has his work cut out.The 53-year-old has to turn around the national carrier, which reported $93 million in losses during the April-June quarter amid higher fuel prices.Thai Airways last posted a profit in the first quarter of 2018. On an annual basis, it last posted a profit in 2016, and in 2012 before that.Sumeth's  previous experience has been in managing government property and in the music industry.The military-led Thai government, which owns 51 percent of the airline, has representation on the board and oversight of investment plans.Jothin Pamon-Montri, a former senior vice president of the airline, said the lack of aviation experience is not necessarily a problem, but Sumeth would need to work closely with career employees."The president must consult management and listen to staff to solve problems and forget the outside advisers," Jothin said.Sumeth will be working with a new board chairman, Ekniti Nitithanprapas, who ran the State Enterprise Policy Office from 2015 to 2018, a government unit that oversees the airline.Ekniti, who took over in July, is seen as a capable bureaucrat but may have his plate full heading the government's revenue department and as chairman of the state-owned Krung Thai Bank.Not all smilesSources close to Thai Airways said a pressing issue was what to do with loss-making subsidiary Thai Smile, which was set up in 2012 as a mid-range brand when Piyasvasti was president.Piyasvasti, who was president from 2009 to 2012, brought the airline into profitability but was removed abruptly by the then democratically-elected government.In 2014, Thai Smile began operating under a separate license, in a move that airline sources said led to problems with services and network connectivity, and let to tension with its parent airline.Jothin, who was at Thai Airways for 35 years, says a priority for the new team is to reintegrate Thai Smile under the Thai Airways brand and license."We had no plans to spin off Thai Smile into its own airline at the time. It was going to be another brand under Thai Airways," Piyasvasti said.Singapore Airlines is planning to do that with its regional offshoot SilkAir to provide a more consistent experience for customers.In the budget market, Nok Air, in which Thai Airways holds a 20 percent stake, has been unprofitable for the last four years in the face of rapid growth from competitors like Thai Lion Air and Thai AirAsia."There could be an opportunity for Thai Airways to increase its involvement and potentially take over Nok," said Brendan Sobie, chief analyst for the CAPA Center for Aviation. "Developing a new multi-brand strategy could be an important initial task for the new CEO. Such a strategy would strengthen Thai's long-term position."