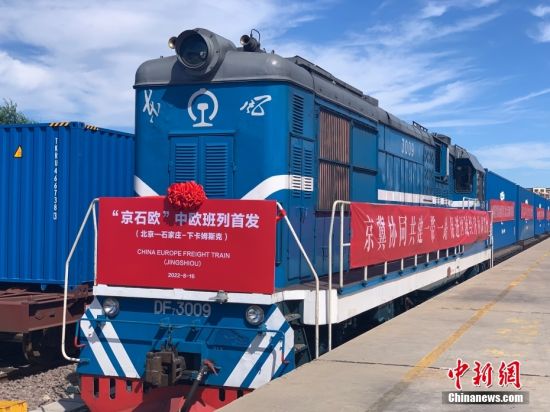 The first Beijing-Shijiazhuang-Europe freight train was dispatched from Beijing on Tuesday and will arrive in Nizhnekamsk, Russia after a transit at the Shijiazhuang International Land Port, according to China News Service.

The 50-compartment train loaded with more than 240 metric tons of refrigerator freezers, self-adhesive paper and spices accumulating a value of over 7.6 million yuan ($1.12 million) will cross the border via Erenhot Port in Inner Mongolia autonomous region.

The opening of the Beijing-Shijiazhuang-Europe freight train helps to relieve Beijing of functions that are not essential to its role as the national capital. An acheivement that facilitates more suitable business logistics for railway transport transited from Beijing to Hebei province, deemed Liu Jinpeng, general manager of the Shijiazhuang International Land Port, adding the freight train is helpful to the coordinated development of commercial logistics between Beijing and Hebei.

Liu Ruiling, chairman of the Hebei Land Port Group said Beijing and Hebei have multiple advantages for cooperation in modern commercial logistics in terms of policy, location and resources. The opening of the Beijing-Shijiazhuang-Europe freight train will promote the docking and integration of the Belt and Road Initiative and the coordinated development of the Beijing-Tianjin-Hebei region.