BUSINESS The U.K.'s $86 billion pension problem is about to solve itself

The U.K.'s $86 billion pension problem is about to solve itself 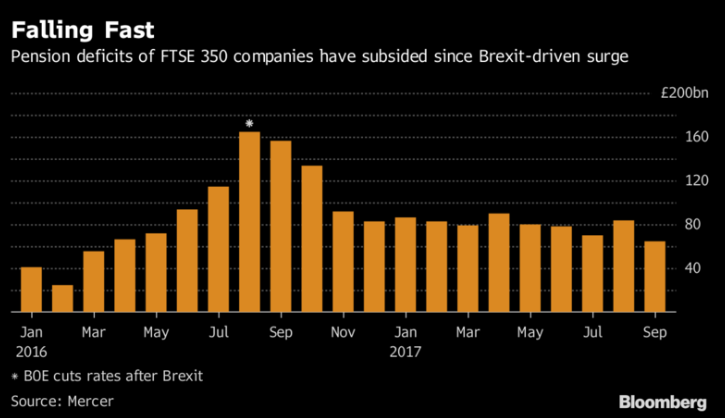 For U.K. Plc, the sting of Brexit comes with an unexpected bonus.

With no effort on their part, British businesses may see pension deficits that have burdened them for years be practically wiped out if the Bank of England raises interest rates as predicted and they budget for slowing gains in life expectancy, according to estimates of New York-based consultancy Mercer.

That will give executives one less thing to worry about as they prepare contingency plans in case Britain can’t strike a deal on splitting with the European Union. Companies like BT Group Plc and Marks & Spencer Group Plc, whose liabilities are almost double their market value, will also remove a stigma that has contributed to years of under-performance in their shares.

“If you bought a basket of these stocks you would probably make money from here,” said Andrew Millington, the acting head of U.K. equities at Aberdeen Standard Investments, which owns shares in firms with big pension liabilities like Tui AG, BAE Systems Plc and AA Plc that he expects will benefit.

The idea that corporate Britain could fill holes in staff retirement budgets without slashing dividends would have been unthinkable even a year ago. The shortfalls of FTSE 350 companies had soared to a record 165 billion pounds ($217 billion) as the BOE cut rates to spur the economy after the Brexit vote, throttling pension income that relies on higher bond yields.

But companies have been “climbing out of a pit” since then, according to Glyn Bradley, principal of U.K. wealth at Mercer. The gap dropped to an 18-month low of 65 billion pounds in September, partly because pension fund managers made more on their equity investments as the FTSE 100 rallied 8 percent in the past year.

Not all investors have noticed the U-turn. The 14 firms with the biggest liabilities relative to market value have trailed the FTSE 350 by 10 percentage points since Brexit, according to data compiled by Bloomberg and RBC Capital Markets.

The game changer will be if BOE Governor Mark Carney raises interest rates to contain inflation triggered by the pound’s post-Brexit decline. Traders see him hiking rates by 50 basis points in the next 12 months, possibly starting as early as the BOE’s Nov. 2 meeting. If the long-term yield on corporate bonds moves by the same amount, that could potentially bring the pension deficit down to about 12 billion pounds, according to Mercer estimates based on current conditions.

What’s left of the shortfall, meanwhile, could be eliminated if listed companies used the latest longevity forecasts from Continuous Mortality Investigation Ltd. in their retirement budgets. Last year, CMI cut projected lifespans for people aged 65 versus the 2013 figures many companies still plug into their models.

“We may well start to see the aggregated deficits across the defined-benefit universe disappearing, perhaps even moving to a small surplus over the next year or so,” Bradley said from Manchester.

Adopting the newer longevity statistics helped Tesco Plc more than halve its deficit between February and August. If BT were to switch, it could knock 1.3 billion pounds from its almost 10 billion-pound deficit, according to Gordon Aitken, a London-based analyst and actuary at RBC. He says BT and Marks & Spencer will benefit most from the revision in longevity.

“Money that gets paid to pension schemes is cash, so it’s money that could go to dividends," Aitken said.

A BT spokesman declined to speculate on potential changes to the company’s pension scheme, citing an ongoing triennial review by trustees. A spokeswoman for Marks & Spencer didn’t respond to messages.

Given how pervasive pension shortfalls have been this decade, some investors may wait for confirmation that deficits can narrow further before jumping in.

A lot could go wrong, after all. Stalled Brexit talks might put pressure on an economy facing the slowest growth since 2012, which would hinder the BOE’s ability to raise interest rates. If inflation keeps accelerating from five-year highs, that would eat into the pension income. And many factors beyond interest rates move bond prices.

But any evidence that pension deficits are sliding could also ease political pressure on business executives to stop prioritizing shareholders over pensioners -- a practice that’s come under greater scrutiny since retailer BHS Group Ltd., and more recently Monarch Airlines Ltd., collapsed and left their pensioners uncertain about the integrity of their policies.

Defined-benefit schemes, which typically guarantee retiring Brits a percentage of their final salary, became untenable for some firms during the era of ultra-low interest rates that followed the global financial crisis. While most companies scrapped them in favor of less-onerous defined-contribution pensions, millions of legacy policies continue to weigh on corporate balance sheets.

While Millington of Aberdeen Standard Investments has been buying shares of life insurers like Aviva Plc and Just Group Plc that win from slowing improvements in mortality, he said the most pension-ridden companies would naturally be slower to lure money managers.

“Investors are just starting to see this trend in U.K. longevity, but many aren’t yet willing to believe it will continue,” he said.