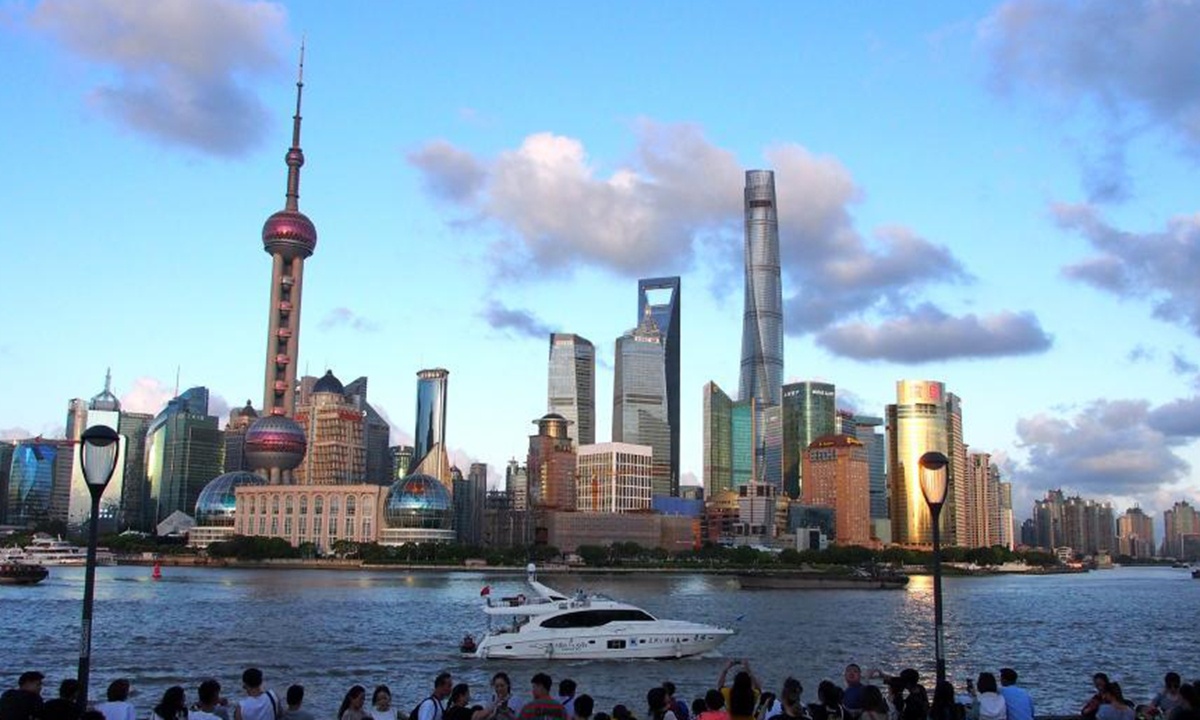 People enjoy the view of Lujiazui at the Bund in east China's Shanghai, Aug. 2, 2019. This year marks the 30th anniversary of China's announcement that it would develop and open up Shanghai's Pudong, which epitomizes China's continuous efforts to deepen reforms and open its doors to the world. (Photo: Agencies)

Famous skylines, hundreds of headquarters of multinationals and financial institutions... There has never been a single picture or simple description of Pudong, an area in Shanghai that started as piece of farmland with a backward economy three decades ago.

During its tenacious advance over the past 30 years, the Pudong New Area has stolen much of the limelight on the international stage thanks to its pioneering implementation of free trade and opening-up, international cooperation, financial innovation as well as self-reliant technological research and development.

If Pudong back in 1990 can be compared to a young boy trying to throw off his shackles to move forward, today's Pudong has grown into a mature man just passing his 30th birthday and sprinting ahead with a strong physique and tight muscles, Wei Jianguo, former Chinese vice minister of commerce and executive deputy director of the China Center for International Economic Exchanges, told the Global Times on Thursday.

From opening a window in the past to opening the door right now and further opening up in the future, Pudong has remained in the vanguard of the takeoff of Chinese socialist market economy, and is expected to contribute more to the new goals set out in the country's 14th Five-Year Plan (2021-25) and longer-term visions up to 2035.

Celebrating Pudong's 30th birthday has taken on even greater significance on the heels of the recently released master plan, since Pudong's development cornerstones greatly overlap with those crucial areas listed in the plan. Pudong is without doubt one of the nation's high grounds in the next round of high-level and comprehensive reform and opening-up.

China is committed to promoting economic globalization against the rising tide of protectionism, while giving full play to its huge domestic market to realize a new development pattern of dual circulation in which the domestic circulation is the mainstay and the domestic and international circulations reinforcing each other. In the process, free trade zones (FTZs) will play a vital role in promoting the efficient allocation of resources, according to Wei.

Even though the Shanghai pilot FTZ was established only seven years ago in Pudong as the first of its kind in the country, it has fully inherited the pioneering spirit of its prototype. With reforms including the first negative list for foreign investment, Pudong has been committed to playing by international rules, pushing to establish systems for trade and investment facilitation.

To deepen the reform in the Shanghai FTZ, Pudong will pilot the "one integrated license" system in 31 sectors, integrating the previously required multiple licenses into one for market access, the State Council executive meeting chaired by Premier Li Keqiang decided on Wednesday.

Since its establishment, the pilot FTZ in Pudong has been actively exploring frontiers to roll out measures in reform and opening-up in a bid to create an investor-friendly business environment for players from both home and abroad.

In addition to simplifying the procedure for doing business, the Shanghai Pilot FTZ has also implemented an array of financial reforms and innovation, striving toward building up an international financial center.

Tian Yun, vice director of the Beijing Economic Operation Association, told the Global Times on Thursday that innovative measures conducted by the Shanghai pilot FTZ, which are internationally competitive, have served well its strategic goal of cultivating a global financial center.

"Under some necessary rules, economic innovation and activities have been injected with more impetus," Tian said.

Emerging technologies represented by chips, artificial intelligence (AI), and biomedicine have become the focal point of competition between countries, due to not only their huge output value but also their crucial position in the industrial chain.

China will focus on achieving independence in key areas such as scientific research, according to the 14th Five-Year Plan.

While Shanghai has significant advantages in foreign trade and international shipping, it is facing even more difficult tasks in building a global scientific and technological innovation center.

The high-tech zone in Pudong, named Zhangjiang, is striving to move in that direction.

The streets of Yuehai in Nanshan district of Shenzhen are under the spotlight, as major Chinese tech giants sanctioned by the US government are located there. But Chinese business representatives in Zhangjiang, the high-tech hub which is home to 229 chipset makers like Semiconductor Manufacturing International Corp (SMIC), appear to face a much tougher battle: the US strangling of the chipset supply, which has also delivered a heavy blow to China's technology growth.

"Some of the major equipment used in making chipsets are imported. For example, the EDA (Electronic Design Automation) tools, are American products, and the US is also leading in manufacturing cutting-edge 7nm chips, so the extreme pressure by the US government has brought many struggles to our factories," Tang Shiqing, director of the science and technology commission of the district government of Pudong, told the Global Times.

The yearlong trade war between China and the US has made more Chinese officials like Tang realize the importance of increasing efforts to boost self-reliance in the high-tech sector. Though some local officials and business representatives in Shanghai's chipset manufacturing hub do not believe a "complete decoupling" between China and the US might take place, they have reached a consensus that working on homegrown technologies should be the long-term strategies not only for companies but also for policymakers.

This changing mind-set also echoes the Chinese top authority's major focuses on the country's social and economic development strategies in the medium-to-long term: boosting the domestic supply chain and homegrown innovation to become completely self-reliant in the economy and core technologies, given the continually mounting external risks.

For Wang Shumin, who returned from the US in 2004 and started up a semiconductor materials company in Pudong in that year, now is "the best time" for the domestic chipset industry to make breakthroughs with the help of attractive fundraising policies and a supportive business environment.

"After more than a decade of hard work and persistence, we have now become one of the major material suppliers to the China chipset market. We now have the capability to invest significantly more in research and development," Wang, who is the chairperson of Anji Microelectronics Technology Co, told the Global Times.

As a veteran business representative in the chipset supply chain, Wang firmly believes that the global semiconductor industry is open and highly integrated, while the "difficulties are temporary."

With a total 104.6 billion yuan in overall revenues for the chipset industry in Zhangjiang high-tech park, local authorities are not deterred by US sanctions against China's high-tech companies, and vow to attract more investment in the next five years, including some "hardcore" technologies in cutting-edge materials, quantum science, innovation and AI.