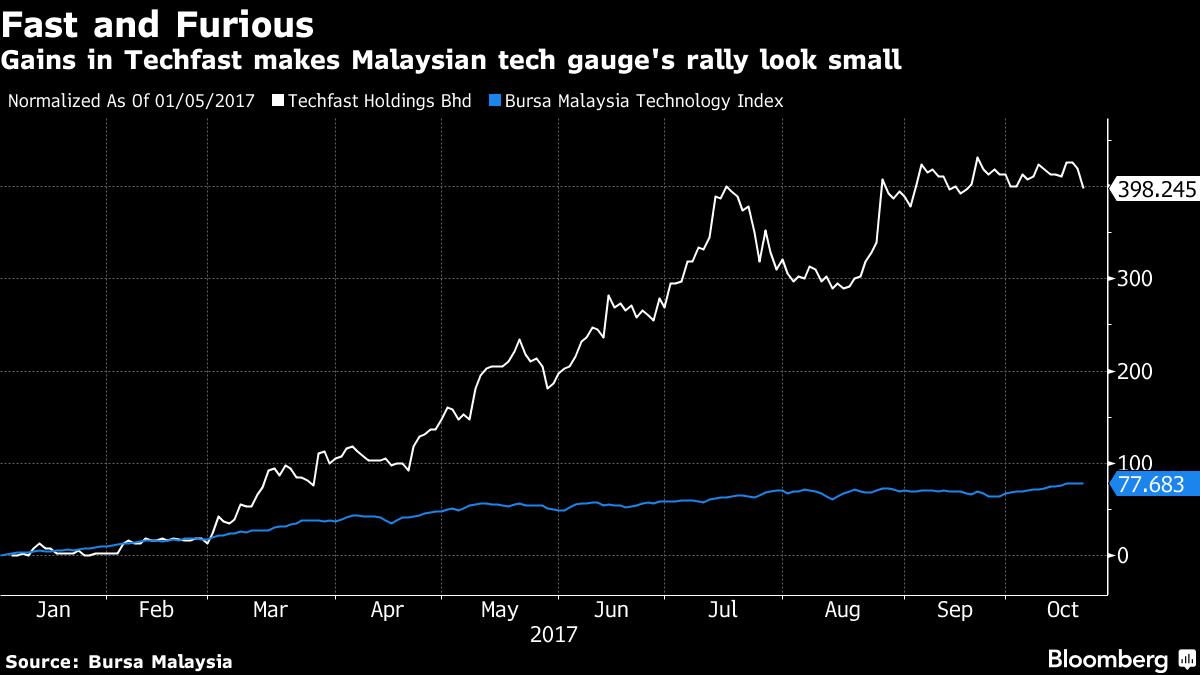 For technology stock investors, it sometimes pays to buy the companies that make the parts.

Take Techfast Holdings Bhd., a small Malaysian supplier of everything from screws and self-clinching fasteners to materials for light-emitting diodes. The little-known firm has surged fivefold this year alone, making it one of the best performers in the country’s equity market, as investors took notice of an overseas expansion and a profitable alliance.

“The margins are beautiful,” Yap, 61, said in an interview at the company’s headquarters on the outskirts of Kuala Lumpur, referring to the Manno tie-up. Clients in those sectors are willing to pay more for quality machined parts, such as shoulder screws used to secure protective casings for sensitive equipment, he said.

Techfast is one of a handful of small-cap Malaysian companies that form part of the technology supply chain. While they often fall under analysts’ radars, knowing them can bring strong returns for investors.

Techfast’s almost 400 percent gain this year compares with a 79 percent advance for a Malaysian index of technology shares. That ranks in the top four of the country’s more than 900 listed firms, according to data compiled by Bloomberg.

Yap founded Techfast in 1999 and took it public in 2005. His current partner and the chairman of the company, Michael Lim Tock Ooi, joined the firm in 2001 after previously serving as its external auditor. The company has factories in Penang state to make epoxy, a material that’s used to make LEDs, and mold-cleaning rubber sheets designed to remove contaminants from machines for making semiconductors.

Techfast’s profit surged 73 percent year-on-year to 1.7 million ringgit ($402,224) in the six months ended June, helped partly by increased sales of its fasteners, which are used in everything from flat-screen TVs to cars.

The company, which supplies its mold-cleaning rubber sheets to about 70 percent of Malaysia’s chipmakers, is expanding into markets like Taiwan and China after winning clients including Chinese chip-testing company Tianshui Huatian Technology Co.

“There’s a reason why we control the market here, and Tianshui as a client is a testimony to our capabilities,” Yap said. The manufacturing process may seem simple, but “it’s difficult to replicate,” he said, adding that there’s plenty of room to expand in those countries: while they require about 180 tonnes of rubber-cleaning sheets per month, Techfast currently only supplies about 12 tonnes.

Techfast also supplies epoxy for making LEDs to clients including Lite-On Technology Corp., a Taiwanese manufacturer of computer components and peripheral equipment, and German light manufacturer Osram Licht AG, according to Yap. He says he’s building one more plant for this business in Penang state.

But Techfast has become more expensive. The company is valued at more than 40 times reported earnings, close to the highest level in two years. And the stock is volatile, swinging between big annual gains and losses since going public.

Still, for Yap, the share-price surge is just the start. He says he plans to return 40 percent of the company’s net income to shareholders starting this financial year, up from 26 percent in 2016.