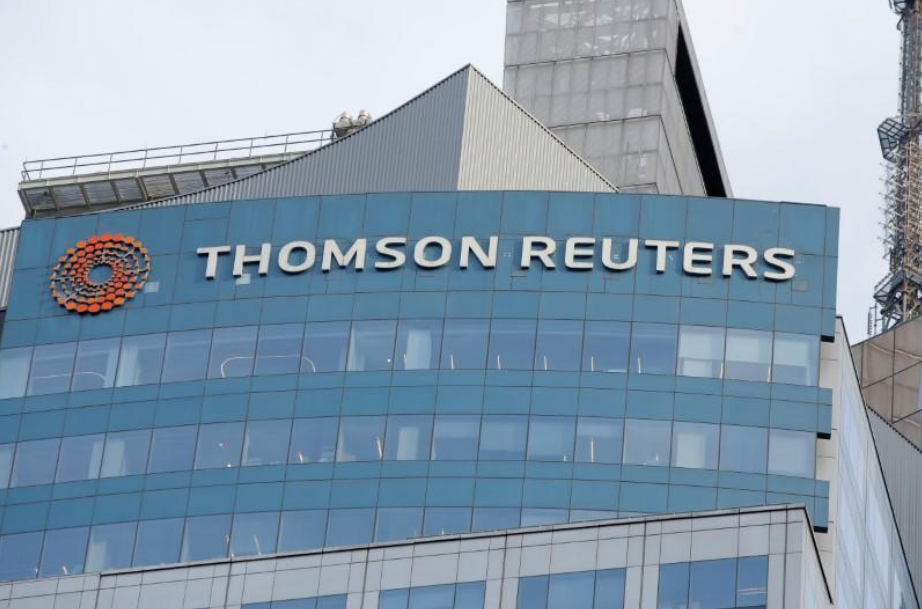 The Thomson Reuters logo is seen on the company building in Times Square, New York, US, January 30, 2018. (Photo: Reuters)

Thomson Reuters Corp forecast its costs would more than double for the year but revenue would only increase modestly. The prediction sent shares of the news and information company down 5 percent as investors fretted about earnings growth after it completes a plan to sell a majority stake in its largest unit.

The company expects $500 million to $600 million in corporate costs this year for tech investments and “right-sizing some areas of the organization,” Chief Financial Officer Stephane Bello told analysts on a conference call after reporting first-quarter earnings.

The estimate does not include the company’s Financial & Risk unit, which sells data and news primarily to financial customers. Thomson Reuters agreed to sell a majority stake in that unit in January to private equity firm Blackstone Group LP. The deal is expected to close in the second half of this year.

The comparable cost figure for 2017, also excluding the Financial & Risk unit, was $244 million.

The sharp growth in expected costs surprised some on Wall Street.

“I thought the transitional costs were going to be in the $50 million-and-under range,” said Doug Arthur, an analyst at Huber Research Partners LLC. “They are talking a very big number ... there is a little shock value to that.”

Nevertheless, he remains positive on Thomson Reuters’ prospects after the Financial & Risk transaction. “I am very bullish on the deal but the bridge to get to the promised land is a little messy and the stock is reacting to that,” he said.

Costs and investments over the next two years could constrain profitability, said analyst Brittany Weissman of Edward Jones.

“There’s uncertainty around ... what earnings growth will look like, especially over the next couple of years as TRI repositions the business,” she added. “However, we were encouraged by the growth in the two largest remaining segments. Sales in the legal division were above expectations.”

For the first quarter, Thomson Reuters reported sales of $1.38 billion, up slightly from $1.33 billion a year ago. Adjusted for special items, first-quarter earnings were 28 cents a share.

Analysts had expected revenue of $1.36 billion and earnings of 27 cents a share, according to Thomson Reuters I/B/E/S.

The company expects adjusted earnings before interest, taxes, depreciation and amortization for 2018 to range between $1.2 billion to $1.3 billion in the remaining business.

That is down from $1.6 billion in 2017, reflecting the projected higher corporate costs.

Shares were down about 5 percent at C$47.52, at one point hitting their lowest level since early 2015 on the Toronto Stock Exchange.

The Reuters News division reported $72 million in revenue, down 7 percent from a year earlier in constant currency.

In the quarter, the Financial & Risk business - now counted as a discontinued operation - grew revenues 3 percent in constant currency to $1.58 billion.

Under the agreement with Blackstone, the new Financial & Risk company will make minimum annual payments of $325 million to Reuters over 30 years to access its news service, equating to almost $10 billion. The payments will be adjusted for inflation.

Thomson Reuters expects to use $1 billion to $3 billion from the proceeds of the Blackstone deal to make acquisitions in legal and accounting, but has no plans to go into new businesses, Chief Executive Jim Smith said in an interview.

Asked about the stock’s 12 percent decline since the day before the Blackstone deal was announced, Smith said: “Investors are still getting their hands on the details of the deal as it is very complicated ... How do you forecast EPS when you don’t know how many ‘S’ there are?”

Smith said he expects to stay on with the remaining Thomson Reuters business after the deal closes later this year.

He also said the company was not currently planning a pay wall for news. Competitor Bloomberg announced earlier this month it would begin a metered pay wall to charge users for access to its content.