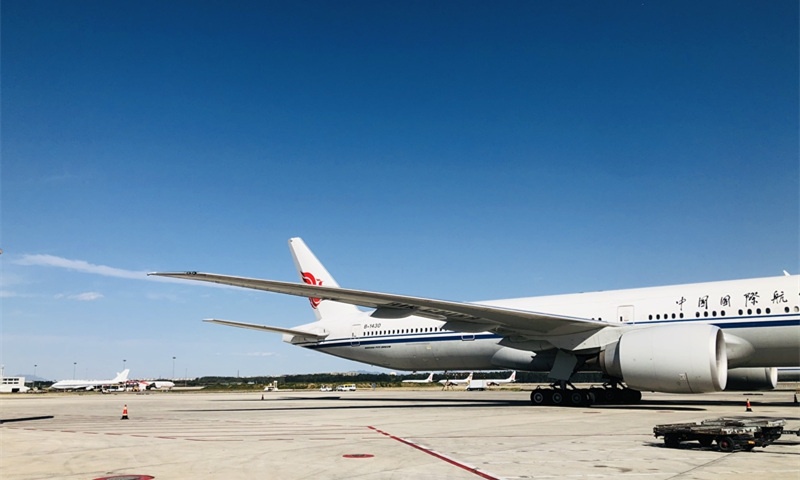 An Air China aircraft stands on the tarmac at the Beijing Capital International Airport, China, on October 13, 2020. (Photo: GT)

Three major Chinese airlines, Air China, China Eastern and China Southern, all announced the suspension of flights between China and the UK.

Air China said on Thursday that it will cancel flights between Shanghai and London from Friday.

China Eastern said it will suspend flights between Shanghai and London from Thursday to January 8.

China Southern Airlines said that it will suspend round trips between Guangzhou, South China's Guangdong Province and London for two weeks due to COVID-19 control measures.

The airlines' move came after the Chinese foreign ministry on Thursday announced the suspension of flights to and from the UK due to a new coronavirus strain.

"Considering the specific nature of the virus and its possible impact, in order to protect the health of Chinese and foreign personnel, China has suspended flights to and from the UK after a full assessment and taking into account the practices of other countries," Foreign Ministry Spokesperson Wang Wenbin announced during Thursday's routine press conference.

Currently, there are eight non-stop flights between the Chinese mainland and the UK every week, as British Airways and Virgin Atlantic each operate two flights a week, and four Chinese mainland airlines - Air China, China Eastern Airlines and China Southern Airlines, and Beijing Capital Airlines - fly once a week.

In addition to the four airlines that operate direct flights to and from the UK, some airlines have issued decisions for transit passengers departing from the UK.

Sichuan Airlines said on Tuesday that it will suspend passenger services departing from the UK to China via a third country from Wednesday.

Data from Flymaster showed that from December 1 to December 20, there were 27 flights from the UK to China, down 89 percent from the same period last year, and the passenger capacity was 8,490 seats, down 87.1 percent year-on-year.

A variation of the novel coronavirus was recently detected in the UK and the World Health Organization has been notified. Several countries have announced measures such as closing borders and banning flights from the UK.