HANGZHOU, Feb. 14 (Xinhua) -- Over the past six years, Fu Shuangli, chairman of textile manufacturer Yingfeng, has made a big gamble: spending on more advanced equipment and training a group of innovative young designers. 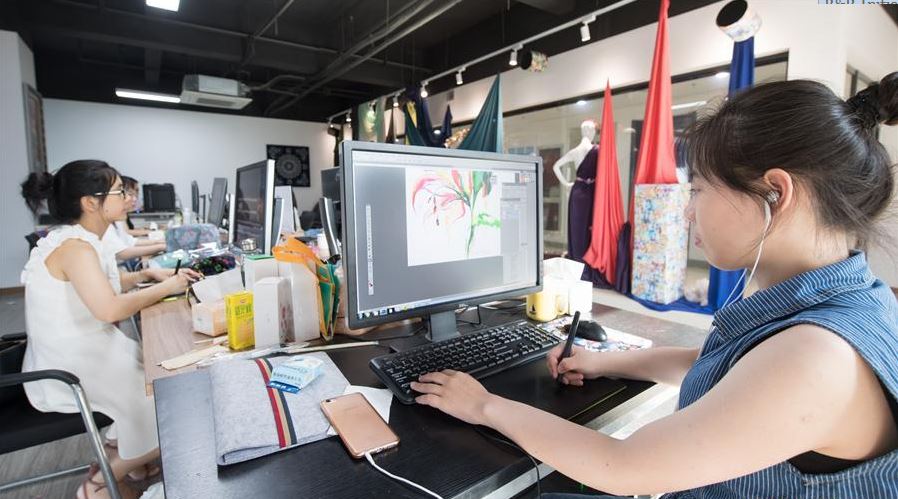 The make-or-break move greatly increased the production efficiency of the company and churned out products that have been welcomed by overseas customers. Last year, the revenue of the company surpassed 1.2 billion yuan ($176 million).

"Nearly six years after Yingfeng moved to the current plant, we have more than doubled our production value," said Fu.

Yingfeng is just one of the success stories in Keqiao district in the city of Shaoxing in eastern China's Zhejiang Province. Through determined efforts on industrial upgrading, manufacturers in Keqiao have over the past years overcome tough situations in global trade and restored the district's traditional status of being a leading textile manufacturing powerhouse in China.

For two consecutive years since 2017, the regional economic output of Keqiao registered a 7 percent growth, a stellar performance compared with that of a few years ago.

As a sign of confidence in Keqiao's growth, in January this year, 16 financial institutions in Zhejiang signed a credit deal worth 150 billion yuan ($22 billion) with local textile manufacturers.

Back in 2008, it was a completely different story. Due to the aftermath of the global financial crisis, demands from overseas markets shrank rapidly. It dealt a huge blow to Keqiao, which relied heavily on foreign trade.

"Many leading textile manufacturers went bankrupt, and 2008 was a lesson for all of us in Keqiao," said Li Chuanhai, head of the local dyeing and printing association. "We realized we needed to pursue high-quality growth from then on."

The local government immediately spearheaded a campaign to shut down high-pollutant dyeing and printing companies, and moved the rest, including Yingfeng, to a newly-built industrial zone. The government also encouraged manufacturers to boost production efficiency and make high-quality products with more added-value.

The transformation process proved too painful for some companies. "Many entrepreneurs came to my office for help, often with tears in their eyes," recalled Shen Zhijiang, Keqiao's party chief. "But for a better tomorrow, we must have the resolve for reform."

To boost their competitiveness, many textile manufacturers in Keqiao sought to move up the value chain. They spent big on designing and producing ready-made clothing and sent their sales teams on world tours.

"In 2018, design companies of Keqiao held a press conference in Milano to establish direct ties with Italian clothing brands. It attracted many Italian companies to invest in Keqiao," said Huang Yanting, a Chinese-Italian designer.

In addition to upgrading its traditional textile industry, Keqiao has also embraced emerging and high-tech industries to diversify its economic structure, such as new energy, new material, chip making and artificial intelligence.

"We have made great efforts to cut red tape to improve the business environment and attract investment," said Zhao Rulang, head of the district government.

A construction project that in the past took up to a year for government approval can now start operation in months, according to Zhao.

"With the better business environment, large investments have been pouring in in recent years, and the district has become a top destination for investments in the province," Zhao said.