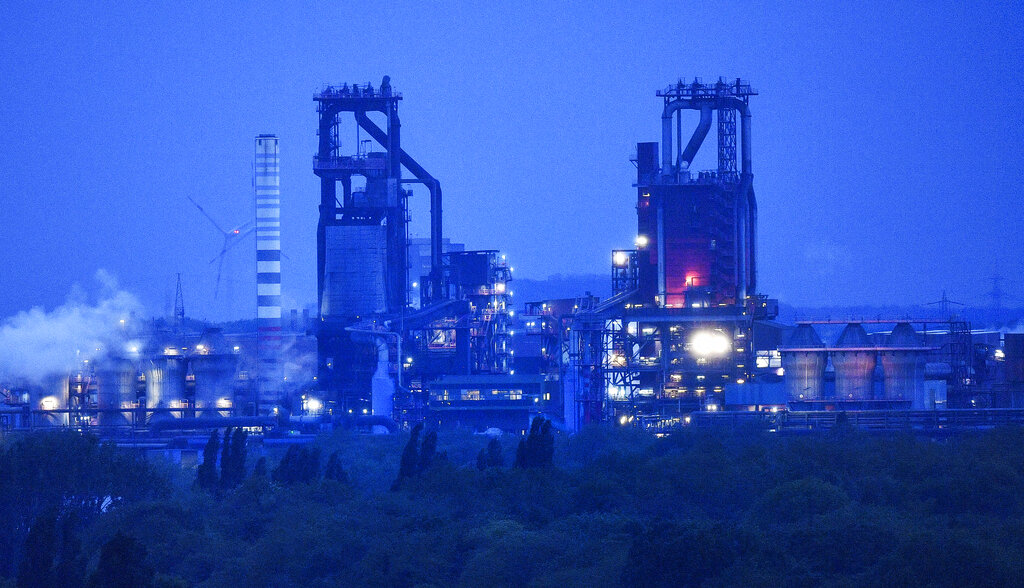 The furnace of German steelmaker Thyssenkrupp is illuminated in the evening twilight in Duisburg, Germany, Thursday, May 9, 2019. (Photos: AP)

The German group said "continuing concerns" from the European Commission had sunk its bid to join its steel business in Europe with Tata's.

The Indian company said in a separate statement that both "partners assume with deep disappointment that the European Commission will not approve the joint venture".

The aim of the merger had been to create the second largest European steel company behind multinational giant ArcelorMittal and to join forces in the face of the surge of Chinese steel.

Having shelved the plans and ruled out offering more concessions to Brussels in order to get a green light, Thyssenkrupp said it was now aiming for a stock market listing of its elevators business as part of a restructuring.

CEO Guido Kerkhoff said Thyssenkrupp's "new group-wide" programme would also include "the reduction of 6,000 jobs" with 4,000 to be cut in Germany and the rest abroad.

While Kerkhoff said while the company had a "good tradition of avoiding compulsory redundancies", he admitted "this time it's a difficult process".

Thyssenkrupp faces "a situation where we had to make this major change, because it is the right decision for the company now in the changed frame conditions", he added.

The group had planned 4,000 job losses, half of them in Germany, if the merger had been successful, but its collapse means the conditional agreement already negotiated with the unions "is no longer valid", admitted Kerkhoff.

"We are building a new Thyssenkrupp... we are going to change a lot of things and it will not be an easy road," he added.

Kerkhoff declined to give any details on the planned IPO of its elevators unit: "as to the right price and the right time, we can't say anything".

The elevator division employs around 50,000 people worldwide and sales of 7.7 billion euros ($8.7 billion) and is one of the group's most profitable areas of business.

Mustafa Okur, an industrials analyst for Bloomberg Intelligence, predicts the IPO could be worth "about 15 billion euros, based on our scenario, and comes as elevator-market sales accelerate."

The flurry of announcements saw Thyssenkrupp's stock soar, up 22.43 percent to 13.76 euros by around 1430 GMT on Frankfurt's stock exchange, while Tata Steel shares closed down 6.1 percent in Mumbai.

Thyssenkrupp and Tata declined to accommodate Brussels' concerns which they said would "affect the synergies expected from the merger" to the point of compromising its economic relevance.

"This is not the end of strategic play as far as Europe is concerned and we will look at other options," said Tata spokesman Kaushik Chatterjee.

From Thyssenkrupp's perspective, the merger had been regarded as a core part of the planned restructuring.

In the wake of the U-turn on the merger plans, the German conglomerate said it has also binned a proposal, put forward last September under pressure from activist shareholders, to split into two separate groups -- "Industry" and "Materials".

Shelving the plan to split is a blow to Kerkhoff, who had banked on the scheme to push profit and simplify Thyssenkrupp's complicated business structure.

"It is clear that Thyssenkrupp has failed with its previous strategy," Lars Foerberg of Cevian Capital, Thyssenkrupp's second largest stockholder, told the daily Rheinische Post.

"There must be no more historical or political taboos if Thyssenkrupp is to seriously tackle its long-standing underperformance and bring its businesses back on track."

In the wake of the failed merger, Thyssenkrupp said it expected a net loss for the year and would release the adjusted group forecast on Tuesday with the second quarter figures for 2019.

The adjustment to the forecasts takes into account the reintegration of the steel division into the conglomerate's balance sheet and the increase of 100 million euros in a risk provision in a German anti-cartel investigation.