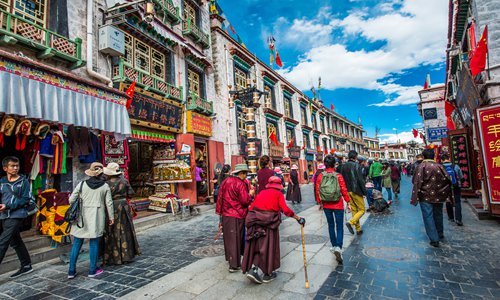 A view of Barkhor Bazaar in Lhasa, the Tibet Autonomous Region. (Photo: VCG)

If there had been no unrest from 1987 to 1989, the Tibet Autonomous Region may have enjoyed around 27 percent higher GDP per capita from 1988 to 2007, said Chinese researchers at the University of Goettingen in Germany. "We attribute the long-term effects of separatism on economic performance to the distortion in resource allocation induced by ethnic hostility and distrust," said the research paper written by Professor Yu Xiaohua and research fellow Sun Feifei, from the Department of Agricultural Economics and Rural Development at the University of Goettingen.Yu told the Global Times on Monday that their research found that ethnic separatism can impact economic development in Tibet Autonomous Region in five different ways: increasing public security expenditure, crowding out foreign investment, harming the tourism industry, creating a temporary "Brain Drain" and reducing both domestic and international trade cooperation. "Uncertainty induced by separatist activities may distort resource allocation, including increasing public security expenditure, changing individuals' consumption, investment and savings behavior, and shifting away from conflict-vulnerable economic activities, such as construction and manufacturing, toward less vulnerable but also less productive activities, such as agriculture," the research paper said.

Since the 1980s, the Dalai Lama and his supporters attempted to divide China and achieve independence of Tibet through violent means. On September 21, 1987, Dalai claimed Tibet is not a part of China but an independent country in his speech delivered in the US Congress, Xinhua reported. Later in October that year, rioters looted a local police station on the Barkhor Bazaar in Lhasa, resulting in seven cars burned and dozens of police officers hurt. Xinhua's report added on March 5, 1988, a mob broke into Party and government offices as well as local police stations and trashed cars and shops, causing 299 casualties. Unrest broke out again in Lhasa in March, 1989 leaving one police officer dead, 40 injured and 107 shops destroyed.

'Synthetic' TibetThe research adopted a synthetic control method proposed by economists Alberto Abadie and Gardeazabal Javier, who had previously studied the economic impact of conflicts in Basque state."In simple words, we used a statistical approach to find several Chinese provinces or autonomous regions that had similar socio-economic characteristics to the Tibet Autonomous Region from 1959 to 1986," Yu said, "and then combine these regions to construct a 'synthetic' Tibet."After taking socio-economic considerations such as population composition, GDP growth and government policy influence, Yu and Sun set up and researched two "synthetic" Tibet models. If there had been no unrest in Tibet between 1987 and 1989, the region's economic development should have followed the weighted average GDP of the "synthetic" Tibet."If the real Tibet's GDP growth diverges from the number of 'synthetic' Tibet, the finding could be treated as the 'economic cost of separatism'," Yu said. One "synthetic" Tibet model is composed of Northwest China's Qinghai Province, Gansu Province and the Xinjiang Uyghur Autonomous Region, with the weighted averages of 21 percent, 37 percent and 42 percent respectively. Another model is a combination of Northwest China's Xinjiang Uyghur Autonomous Region, Shaanxi Province and Northeast China's Liaoning Province, with the weighted average at 68 percent, 19 percent and 13 percent separately.It is notable that before 1987, the GDP growth trend of the two models were almost the same as that of the real Tibet.However, after the unrest in 1987, the weighted average of GDP per capita of the two "synthetic" Tibet was 26.98 percent higher than the GDP number of real Tibet. "In other words, if there hadn't been this unrest, per capita GDP in Tibet may be 26.98 percent higher," concluded the two researchers. Due to the unrest, China's central government accordingly changed the policies towards Tibet, the paper said, "It makes sense that it took about three years to materialize the policy effects, as we see the effect became very large in 1993," said the two researchers.