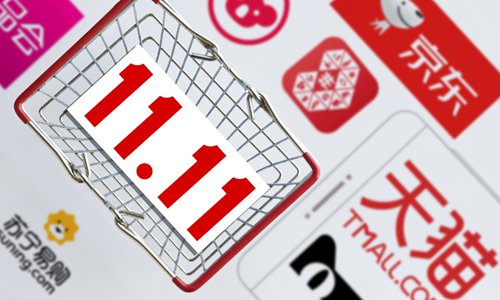 In just one minute after the this year's Tmall Double 11 presale kicked off at midnight on Monday (Beijing time), sales exceeded 100 million yuan ($14.13 million), according to data from e-commerce platform tmall.com under Alibaba, the main battlefield of the largest annual online shopping spree.

More than 500 million consumers, about one-third of China's population, will take part in this year's Tmall Double 11 online shopping festival on November 11, Jiang Fan, president of taobao.com and tmall.com said on Monday.

Participants will also grow significantly for this year's Double 11 festival, as about 50,000 brands and businesses will join the event for the first time this year, data provided by Alibaba to the Global Times showed.

Dai Yaping, a Shanghai-based consumer, told the Global Times on Tuesday that there are "nearly 30 products" on her online shopping list for this year's festival, arranging from pet food to health products.

"I don't think prices are really as low as many people expect, but it has become a sort of habit for me to shop a lot on this day," she said.

The continued burgeoning sales of the Double 11 festival also reflects the vigor of China's consumption market and the nation's spending power despite the downward pressure on the economy, experts told the Global Times.

Retail sales were up 7.8 percent year-on-year in September, compared with 7.5 percent growth in August. In the first three quarters, retail sales rose by 8.2 percent on a yearly basis, according to data released by the National Bureau of Statistics (NBS) on Monday.

"The fact that China's consumption still grows relatively fast shows that China's economy is resilient and things are not as pessimistic as some overseas media reports have stated. On the other hand, the growing consumption will also give impetus to the broad economy when other sectors are weighed down by factors such as the China-US trade war," Zhang Yi, CEO of Shenzhen-based iiMedia Research, told the Global Times on Tuesday.

According to Zhang, curbs on home-buying have created great scope for other types of consumption.

Independent Beijing-based analyst Liu Dingding said that China's rapid industrial updating will boost consumption. "For example, the shift from the 4G to the 5G era will push many consumers to change their mobile phones, pushing sales in relevant industries," he told the Global Times, adding that the e-commerce sector will show even more potential for growth.

"Online shopping's proportion of overall consumption will grow increasingly larger, as e-commerce penetrates deeper in the country," he said.