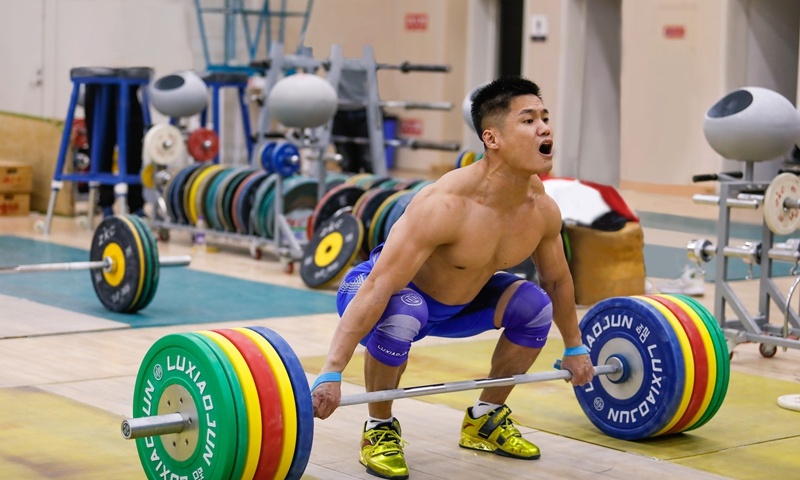 Chinese weightlifter Lv Xiaojun trains in Tianjin with the barbells of his own brand in 2019. (Photo: Agencies)

The just-concluded Tokyo Olympics craze is driving China's sports industry to the fast lane. With an ambitious plan to build sports into 5 trillion yuan ($773 billion) industry by 2025, sports equipment makers and industry practitioners expect the sector to fuel consumers' increasing appetite for sports activities and consumption.

According to the statistics provided by Chinese job-hunting platform Liepin to the Global Times, new job vacancies in the sports industry jumped 24.2 percent in the first seven months compared with the same period last year.

More investments and sponsorship deals may flow to the top athletes. Chinese TV manufacturer Skyworth told the Global Times it has an intention to cooperate with the athletes who shined at the Olympics.

At the Tokyo 2020 Olympic Games, Team China bagged a total of 88 medals including 38 golds, 32 silvers and 18 bronzes, ranking second in the final medal tally.

Spurred by the successful performance of Chinese athletes in Tokyo, market analysts are optimistic about the industry's prospects.

"We have seen rises in the online store's number of visitors, its trading volume, and in followers' and fans' interactions," Wang Jiajia, head of domestic business at the barbell and plates brand under Chinese athlete Lv Xiaojun, told the Global Times on Monday.

Lv, a veteran weightlifter, won the championship with a 170-kilogram snatch, and a 204-kilogram clean and jerk on July 31 in Tokyo. He is the holder of two world records for clean and jerk and also for total score.

Due to a great number of fans overseas and the mature development of the sports industry abroad, Wang said that earnings from overseas markets doubled those of the domestic market, with the US remaining the largest market for the brand.

"Working out has turned from bodybuilding into a functional activity… With the growing popularity of CrossFit gyms in China, people's awareness of weightlifting is gradually increasing," Yang Yilin, who is responsible for speaking to the media on behalf of the brand, told the Global Times.

The Chinese government announced earlier in August an ambitious plan to make sports 5 trillion yuan industry by 2025. This suggests the sector is heading for an increase of 69.5 percent from its size in 2019. Such growth would be far higher than the average rate of 55.3 percent during 2016-19, media reports said.

"There is no problem to reach this goal, but the current consumption willingness for sports in China is not strong enough. In addition, the supply side is not sufficient," Zhang Qing, CEO of Key Solution Sports Co, a consulting firm for the sports industry in China, told the Global Times on Monday.

"In five to 10 years, the sports industry may become a pillar industry for China's economy. It means its proportion will account for 5 percent of the country's GDP," Zhang said, suggesting that an adjustment of the industry's structure is urgently needed.

Sports goods account for about 60 percent of total earnings in the industry thanks to China's strong manufacturing, but in the sports services industry, such as sports competition and fitness training, China has huge room to grow, according to Zhang.

However, the gap between the sports industries of China and the US remains large. According to a report by Deloitte, the average gym permeability in 18 Chinese big cities was only 3.9 percent in 2019, far behind the US (20 percent), the UK (15 percent) and Japan (8 percent).

Lin Xianpeng, a professor at Beijing Sport University, told financial website 21jingji.com that Chinese per capita spending on sports is only 1/25 of Americans.

"Only if we trigger consumption demand for sports will the industry grow stronger," Lin said.

The key lies in education, industry practitioners agreed. "We should produce more sporting talent at the higher education level, instead of people for competitions. That includes dieticians and physical therapists, who could support the sports industry," Wang said.