TOKYO, July 15 (Xinhua) -- Japan's Meteorological Agency said on Monday that central Tokyo has only seen less than three hours of sunshine over an 18-day stretch, setting a new record since 1988. 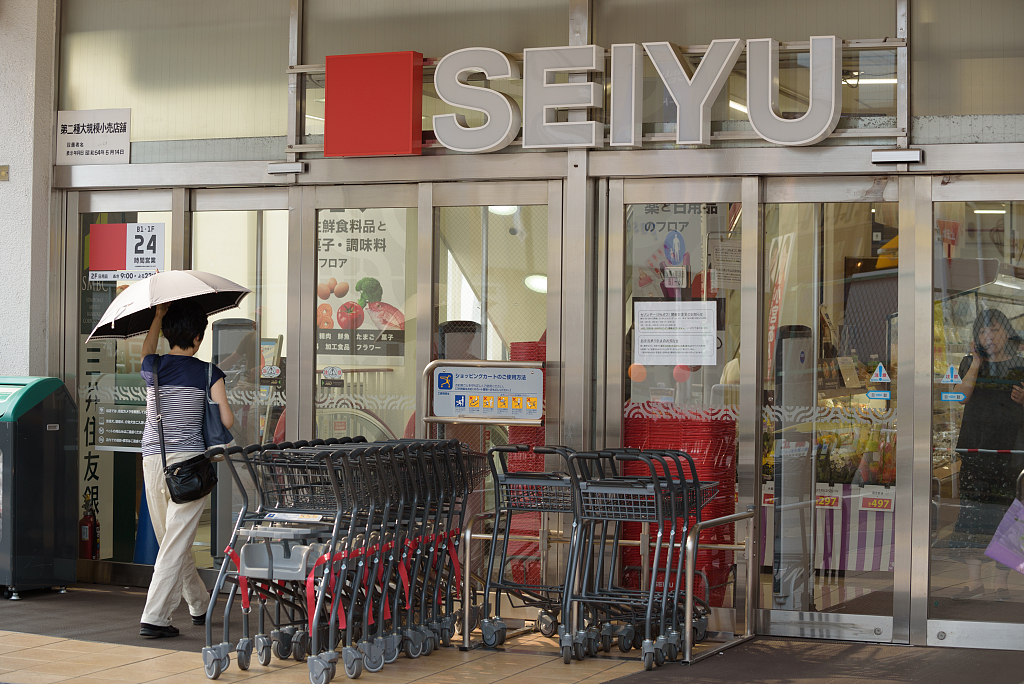 A customer walks toward a Seiyu GK supermarket in Tokyo, Japan. (Photo: VCG)

The lack of sunshine affects crop production and drives up vegetable prices. According to government statistics, wholesale price of cucumber is about 50 percent higher than in previous years.

The eastern and western regions of Japan continue to experience low temperatures and see little sunshine since late last month. Japan's Meteorological Agency said that downtown Tokyo had less than three hours total of sunshine over an 18-day stretch, exceeding the record of 17 days set in 1988.

Cities across eastern Japan saw much less sunlight in the 10 days through Sunday than in previous years. Saitama city has only 2 hours of sunshine altogether, only 5 percent of normal years. Central Tokyo has 2.8 hours, about 7 percent of average years.

The temperature is also lower than normal years. According to Japan Weather Association, the highest temperature of Tokyo metropolitan area continues to fall below 25 degrees for eight days until last Friday.

Japan Meteorological Agency forecasts that there will be more cloudy and rainy days, especially in eastern Japan and western Japan, for a week or so, and the temperature will be lower than normal and the sunshine hours will be shorter.

The agency calls for careful attention to crop production. In 1993 and 1988, when the temperature was low and there was a severe shortage of sunlight, crops were seriously damaged in various parts of Japan.

The bad weather has already influenced the prices of some vegetables, among which cucumber is more than 50 percent higher over the average years.

According to the Ministry of Agriculture, Forestry and Fisheries, the wholesale price of the main vegetables at the Tokyo Central Wholesale Market is higher than normal years, with cucumber up 57 percent, eggplants up 20 percent and green peppers up 9 percent, respectively.

Among them, cucumbers are growing slowly due to lack of sunshine in Fukushima Prefecture and Gunma Prefecture, which are the main production areas of this period, and prices have risen sharply since around last Monday.

The ministry said that low temperature and little sunshine could continue to influence crops and it is closely monitoring the trend of weather and prices.

However, the price of onions is about 30 percent lower than the average year, while white radishes and carrots are also down.

According to the ministry, the prices of white radishes and carrots are below normal because the main production area of Hokkaido Prefecture is not affected by lack of sunshine and the growth is steadily. The price of tomato is also stable.