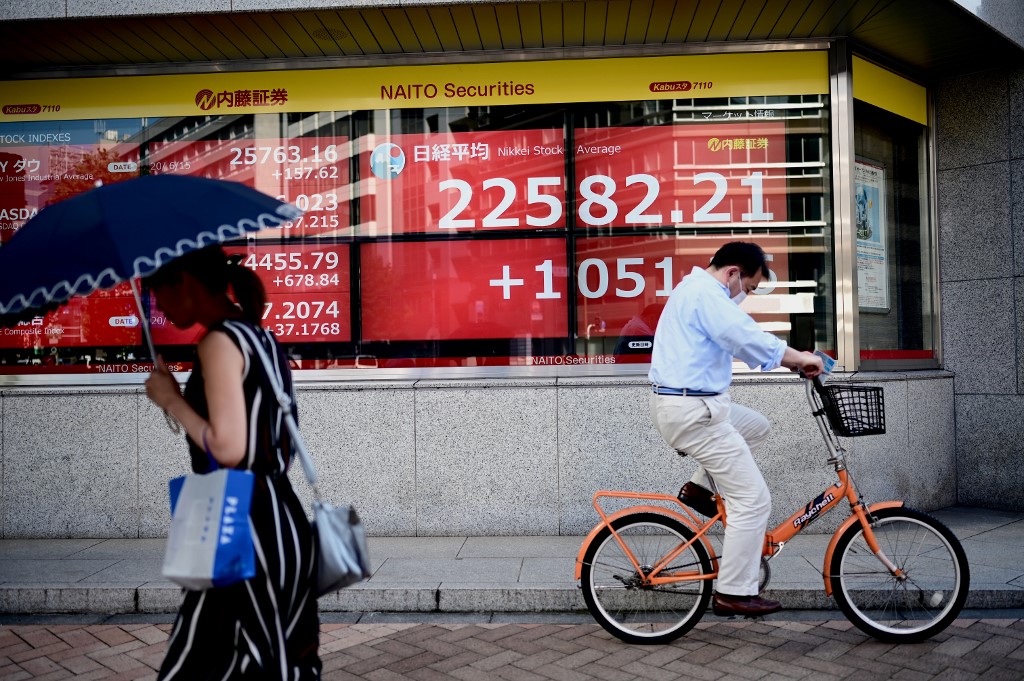 Investor sentiment was bolstered from the get-go as a comparatively weak yen versus the U.S. dollar made issues whose firms are broadly exposed to overseas markets, like automakers and some technical shares, an attractive proposition, brokers here said.

Increasing COVID-19 cases at home and abroad, meanwhile, including reimposed business restrictions in some virus-hit regions in the United States, and cases in Tokyo rebounding, led to trading being slightly lackluster, brokers said.

"The market is looking to see if selective lockdowns implemented by some states will curtail infections within a week or two," Nobuhiko Kuramochi, a market economist at Mizuho Securities, was quoted as saying.

But they added in terms of Tokyo, sentiment was largely unaffected Monday as despite the recent and prolonged rise in COVID-19 cases, the Tokyo metropolitan government has not reissued any business or restrictions on people's movements.

The market's biggest influence, however, was Chinese shares surging to a more than five-year high on further indications the world's second-largest economy is continuing to recover from the pandemic, with China-linked issues here finding favor.

As such, chip-makers, highly susceptible to external factors, gained ground on hopes for a broader global recovery led by China, with Tokyo Electron climbing 2.7 percent, while Screen Holdings jumped 5.5 percent.

SoftBank hitting its highest level in 14 months, rising 2.4 percent supported the market, while Nissan Motor accelerating 5.2 percent on robust sales in China in June, underscored hopes for Japanese firms' production and output in China and other major markets recovering.

As for exporters benefiting from the yen's retreat versus its U.S. counterpart, Honda Motor gained 1.6 percent, while Panasonic advanced 3.4 percent by the close.

Issues driven by domestic demand also advanced on the government staying pat on its decision not to reimpose coronavirus-linked restrictions, despite COVID-19 cases spiking in the capital, and J.Front Retailing surged 7.3 percent, while Seven & i Holdings gained 2.9 percent.

By the close of play, marine transportation, securities house, and iron and steel-linked issues comprised those that gained the most, and issues that rose outpaced those that fell by 1,888 to 244 on the First Section, while 38 ended the day unchanged.