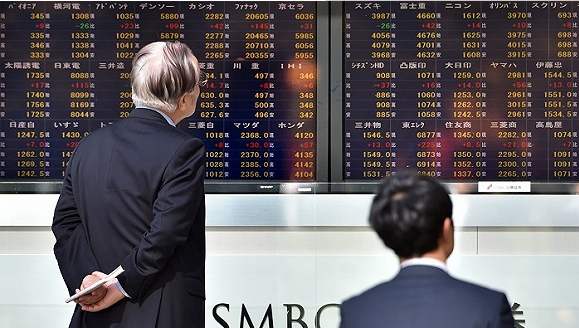 The broader Topix index of all First Section issues on the Tokyo Stock Exchange, meanwhile, added 62.67 points, or 4.09 percent, higher to finish at 1,593.45.

Investors were in a risk-on mood from the get-go, local brokers said, as the U.S. Federal Reserve announcing a new corporate debt purchasing program underpinned hopes for the U.S. and broader global economic recovery.

They added that reports that Washington is planning to roll out an almost 1 trillion U.S. dollar infrastructural package to help support the virus-ravaged economy, added to investors' risk appetite.

"A sense of relief over the emergency aid in and outside the country overwhelmed recent concerns about another wave of virus infections," Shingo Ide, chief equity strategist at the NLI Research Institute, was quoted as saying.

Other market analysts said that recent figures showing that coronavirus cases had been rising in Tokyo, surpassing 40 new infections in the capital for two straight days through Monday when 48 cases were recorded, the highest daily increase since May 5, where shrugged off for the time being.

Underlying concerns remained about the government's plans to further ease virus-linked restrictions this week including those pertaining to cross-prefectural movement, they said, however.

Rising tensions on the Korean Peninsular were also put on the back burner, investment strategists said, and cyclical issues, often susceptible to geopolitical issues, were firm amid the broad based rally.

Exporters also found traction as the yen dipped against the U.S. dollar, which is a boon for firms broadly exposed to overseas markets as their overseas profits are boosted when repatriated from abroad.

SoftBank Group ended the day 2.8 percent higher, after announcing potential plans to sell its shares in T-Mobile U.S. Inc. to bolster its finances.

By the close of play, all industry categories closed in positive territory, with iron and steel, marine transportation and transportation equipment issues comprising those that gained the most.

Issues that rose trounced those that fell by 2,104 to 48 on the First Section, while 16 ended the day unchanged.