TOKYO, March 5 (Xinhua) -- Tokyo stocks ended mixed Friday amid continued concerns over a recent surge in U.S. bond yields and higher interest rates, but losses were trimmed ahead of the release of key U.S. jobs data. 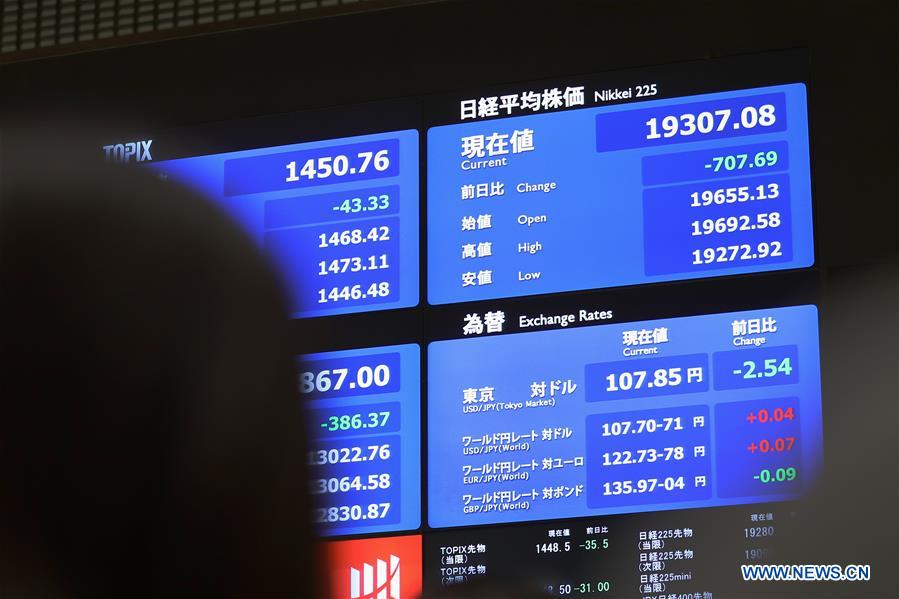 "The move of the U.S. long-term bond yields is now the center of the attention for stock investors," Yoshihiro Takeshige, general manager at the investment management department of Asahi Life Asset Management, was quoted as saying.

"If the move of yields will become out of control, Japan's market could be dragged lower, led by declines in U.S. technology shares," Takeshige added.

Losses were trimmed however, by expectations that the Bank of Japan (BOJ) had purchased exchange traded funds (ETFs) during trading hours to bolster the market and as part of its monetary easing program.

"Favorable jobs data could push U.S. bond yields even higher and dent stock markets. But the opposite is also possible, so investors bought back some shares," Toshikazu Horiuchi, equity strategist at IwaiCosmo Securities Co., was quoted as saying.

By the close of play, real estate, service and marine transportation-linked issues comprised those that declined the most.

Real estate issues came under pressure as the knock-on effect of rising U.S. bond yields hit Japan and triggered concerns over the sector's rise in liabilities and earnings outlooks.

As such, Sumitomo Realty & Development retreated 3.4 percent, while Mitsubishi Estate lost 3.0 percent by the close.

Exporters marked a bright spot however, gaining traction on the yen's decrease against the U.S. dollar, with Honda Motor accelerating 1.6 percent, while Panasonic added 3.6 percent.

Issues that rose outpaced those that fell by 1,352 to 753 on the First Section, while 89 ended the day unchanged.