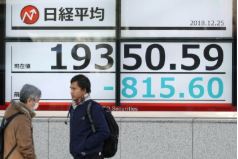 Tokyo stocks plunged five percent on fears about the US economy and a government shutdown in Washington. (Photo: AFP)

Tokyo stocks plunged on Tuesday as the few Asian markets open on Christmas suffered a holiday rout on fears about the US economy and a government shutdown in Washington.

Tokyo markets, which were closed on Monday for a national holiday, plummeted at the open on Tuesday, with the Nikkei closing down five percent -- over 1,000 points.

It was the worst finish since April 2017 and followed a brutal holiday-shortened session on Wall Street that saw US stocks sink for a fourth straight session.

In Asia, many markets were closed for Christmas, including in Australia, Hong Kong and South Korea. US and European markets are also closed for the holiday.

But the downturn affected those bourses that remained open, with China's benchmark Shanghai Composite Index tumbling more than two percent during the morning session, though it pared some of its losses to close down 0.9 percent.

Markets have been roiled by ongoing uncertainty in the United States, with Treasury Secretary Stephen Mnuchin widely panned for holding a call with the six biggest US banks and then reporting on Twitter that the six CEOs have "ample liquidity" available.

Investors were also unnerved by weekend news reports that US President Donald Trump had asked about the possibility of firing Federal Reserve Chairman Jerome Powell, accounts that Mnuchin said Trump had denied.

Last week, the central bank hiked rates, infuriating Trump who has ignored the traditional respect for the Fed's independence, calling it "crazy", "out of control" and a greater economic threat than China.

The Dow Jones Industrial Average slumped nearly three percent by the close on Monday, with the broad-based S&P 500 down 2.7 percent and the tech-rich Nasdaq Composite Index down more than two percent.

The declines brought the S&P 500 to the brink of a "bear market," considered a drop of 20 percent from its peak.

CNBC reported the losses were the worst ever for Wall Street on Christmas Eve, a holiday-shortened session ahead of Tuesday, when markets are closed.

Stephen Innes, head of APAC trading at OANDA, said Trump's spat with the Fed and Mnuchin's call with the banks had "markets running for cover."

Investors "have no confidence in the administration. Markets are driven by perception and it is flat-out bad," he told AFP.

A stronger yen was adding to the woes for markets in Japan, he added.

"I can't tell you where the bottom will be as there are various risks," said Makoto Sengoku, a market analyst at Tokai Tokyo Research Institute.

"There are no signs of selling running its course or big buyers emerging," he told AFP.