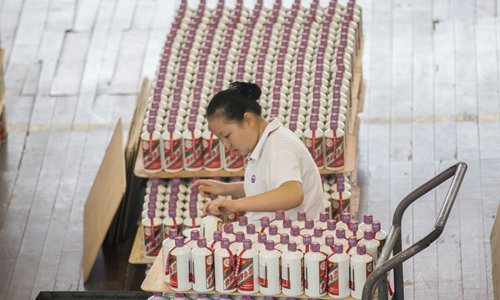 China's top liquor maker Kweichow Moutai posted rising revenues and earnings for the first three quarters of the year despite the COVID-19 pandemic, the company's quarterly financial data showed on Sunday, as the nation's biggest domestically listed firm is well on pace to hit its annual fiscal targets.

Moutai's domestic sales hit 65.12 billion yuan, as opposed to its sales in overseas markets, which amounted to 2.02 billion yuan, read its stock filing.

Judging by the quarterly fiscal numbers, Moutai is well on course to reach its yearly targets.

At a work conference at the beginning of the year, Li Jingren, general manager of Moutai, revealed that the liquor maker set a sales revenue target of 110 billion yuan for this year, up 10 percent from the year before. Its net profit target was set at 50.5 billion yuan for the full year, suggesting 10-percent growth on a yearly basis.

In addition, the company targeted annual liquor production of 150,000 tons and yearly sales of 142,000 tons.

Industry watchers expect a continued increase in the distiller's production capacity to help ease tight supplies of the status symbol. Moutai's output has continued an upward spiral over the years, but its products have long been in short supply, shoring up its retail prices.

As of Friday, shares of the premium liquor maker were up 47.12 percent for the year, outperforming a year-to-date gain of 7.47 percent for the flagship Shanghai Composite Index.

The Shanghai-listed liquor brand overtook Industrial and Commercial Bank of China as the top listed firm in the Chinese mainland market in late June.

Moutai's market capitalization hit 2.2 trillion yuan on Friday. But its leadership in the A-share market by capitalization may soon be unseated by Ant Group. The fintech giant, ready to debut in both Shanghai and Hong Kong, will likely raise its IPO valuation to between $380 billion and $461 billion.