BUSINESS Tough work ahead on China-US talks, but Beijing is prepared for worst if 90-day trade truce fails, says expert

Tough work ahead on China-US talks, but Beijing is prepared for worst if 90-day trade truce fails, says expert 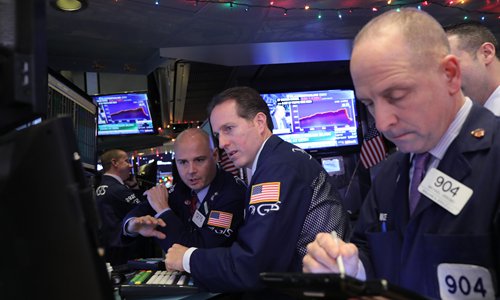 Traders work on the floor of the New York Stock Exchange on Monday. The Dow Jones industrial average opened more than 400 points higher following positive news from weekend trade negotiations between China and the US in Argentina. Photo: AFP

The apparent China-US trade truce is not a result of unilateral compromises by the Chinese side, but the obvious thaw in trade tensions between the world's two largest economies does signal a de-escalation in the potential for "a new cold war" that is reportedly contributing to dampening global growth outlook, Chinese officials and experts said on Tuesday.

The upcoming 90 days of trade negotiations are expected to require very tough work and China is fully prepared for the worst scenarios, said experts.

"It's a good start to see the leaders of the two countries sit down and talk amid ongoing trade frictions, which has helped avoid a full-scale 'new cold war.' But if this 90-day negotiation period ends badly, we have plenty of countermeasures too," Jin Canrong, associate dean of Renmin University of China's School of International Studies, told the Global Times on Tuesday.

US President Donald Trump said in Tweets on Monday that China intends to immediately purchase agricultural products and has also agreed to reduce and remove tariffs on US-made cars exported to China. The White House also said in a statement that China also will give a green light to Qualcomm-NXP deal and agreed to designate the drug Fentanyl as a controlled substance.

While Trump bragged about the results of his Saturday meeting with Chinese President Xi Jinping, China has also wrestled some concessions from the US, Jin said.

The US is no longer obsessed with the "Made in China 2025" strategy and did not attack China's industrial policy as it has in the past, said Jin.

"This is a positive sign for both sides. The US brought up matters such as forced technology transfer and protection of intellectual property rights [IPR], and we can work hard to find effective solutions to concrete issues instead of unreasonable requests," Jin said.

The "Made in China 2025" strategy has been a major concern for the US, which has suggested the national policy was an attempt by the Chinese government to seize global leadership in advanced technology.

Beijing has made numerous sincere moves in an attempt to mitigate the trade friction and Washington should respond in kind, instead of seeking political gains for domestic consumption by bragging it had easily won concessions from China, said Chinese observers.

The US government has named  Robert Lighthizer to head the US team in negotiations, but United States Secretary of the Treasury Steven Mnuchin, who previously has been more conciliatory, will also be very much involved in the talks, CNN reported on Monday,

As US attempts to balance wildly divergent interests, its negotiators will include both hawks and doves, Wei Jianguo, former Chinese vice minister of commerce, told the Global Times on Tuesday.

"The Chinese side may include Vice Premier Liu He, and officials from the Ministry of Commerce, National Development and Reform Commission and others," Wei said.

Already there appears to be miscommunication and confusion if not dissent among the White House team, which has made conflicting statements regarding the start of the 90-day delay in the imposition of higher US tariffs, said observers.

Larry Kudlow,director of the White House National Economic Council, said the 90-day countdown is to begin January 1, the Washington Post reported on Monday.

Mei Xinyu, an expert close to the Chinese Ministry of Commerce, told the Global Times on Tuesday the miscommunication indicates confusion inside the Trump administration, and that the previously reported internal fights are continuing.

Mnuchin told CNBC on Monday that China has put on the table an offer of over $1.2 trillion in additional commitments, including purchasing more American products and enlarging market access for US firms investing in China.

"It's unlikely that China would make such a specific commitment, and $1.2 trillion is surely only an estimation made by the US," Wei said.

China will not backtrack and is sure to deliver on its commitments by opening multiple sectors of the economy in accordance with its own timetable and road map, the former senior trade official noted.

Diao Daming, an American studies expert at the Renmin University of China, told the Global Times on Tuesday that further lowering import tariffs is not a compromise but a step forward in delivering the Chinese government's promises to broaden its opening-up.

"Increasing imports of American products will have to be market driven. For example, after US beef gained access to the Chinese market last year, it did not attract a lot of Chinese consumers," he said.

While the leaders of China and the US have put at least a temporary halt on tit-for-tat trade disputes, and this progress has given direction to bilateral relations going forward, Chinese officials and experts are cautious in predicting the negotiations will bring positive results, saying it's going to be "very tough work."

China may agree to buy more American products, open up its market and protect IPR, but "the Chinese government will not accept US demands to change our economic structure or abandon our industrial policies," said Jin, the associate dean of Renmin University.

China and the US, as two world powers, should also seek common interests in global affairs such as the Iran nuclear accord and the crisis in Syria, and the US needs China's support on matters like the North Korea nuclear issue, he noted.