Tourism rebounds during May Day holiday 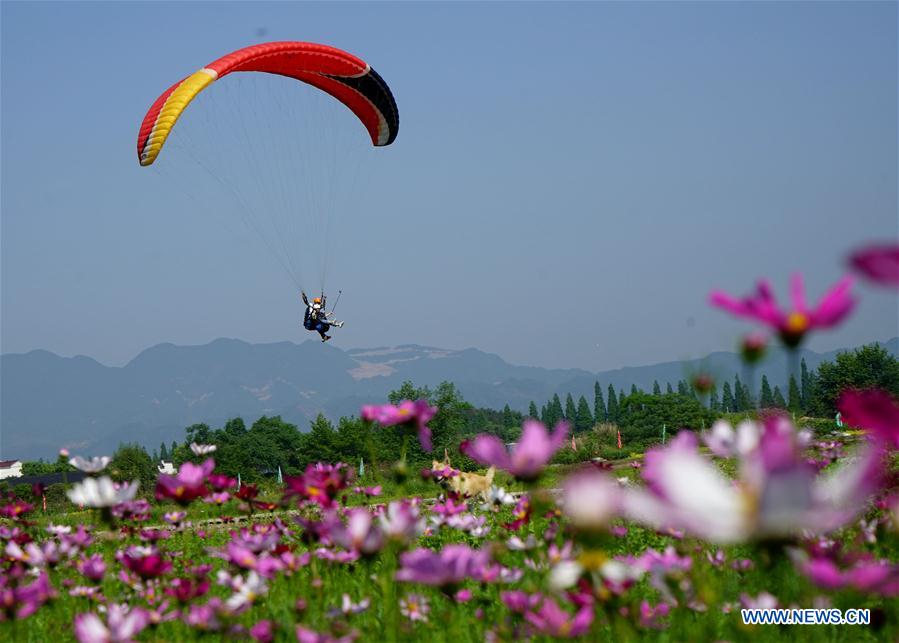 As the novel coronavirus epidemic in China becomes more subdued, the country is trying to get tourism back on its feet, with the majority of scenic attractions reopening and a large number of tourists returning to popular sites during the May Day holiday season.

China saw nearly 104 million domestic tourist trips in the first four days of the five-day May Day holiday season which started May 1. And domestic tourism revenue generated during the period totaled 43.23 billion yuan (about 6.12 billion U.S. dollars), according to the Ministry of Culture and Tourism.

The surge comes after a relaxation of travel restrictions amid dwindling COVID-19 cases in the country. One confirmed case arriving from overseas was reported on the Chinese mainland Monday, and there were no new domestically transmitted cases, the National Health Commission said Tuesday.

In the first three days of the holiday, Beijing's 124 major tourist attractions received over 1.89 million visitors, up 58.5 percent compared with the three-day Qingming Festival holiday in early April.

In Shanghai, a total of 130 main tourist attractions received over 1 million visitors in the first two days of the May Day holiday, according to the Shanghai Municipal Administration of Culture and Tourism.

Again in Beijing with the Palace Museum. The museum, also known as the Forbidden City, was partially reopened from Friday after more than three months of closure due to COVID-19. Visitors now need to make reservations online before visits, and the daily number of visitors is limited to 5,000.

According to the museum's online booking system, all 25,000 tickets throughout the five-day holiday were gone within 12 hours since the reopening news was released.

"For the Qingming Festival holiday, I joined a livestreaming tour of the Forbidden City. When I heard that it reopened, I could not wait to get out of my house and see it in person," a tourist surnamed Liu said.

As the nationwide battle against the epidemic has gained major strategic achievements, China has eased curbs on travel and relaxed rules on quarantine.

People from low-risk regions of China are not required to stay quarantined for 14 days upon arriving in Beijing since the city lowered its level of novel coronavirus emergency response from the highest to the second-highest starting April 30.

Search and reservations for Beijing local trips, car rentals and scenic spots tickets during the May Day holiday season have reached a peak since April, according to China's largest online travel agency Trip.com Group.

Chinese tourists are expected to take more than 117 million domestic trips during the holiday. Short inter-provincial journeys by private vehicles will be the most common, according to the Ministry of Transport.

The view is echoed by Wang Xiaosong, chairman of online travel agency Lvmama.com. Wang said tourists are shifting their focus from outbound tours to travel near their homes during this May Day holiday, and they are looking for a better and safer travel experience.

"In the past, the Beijing-based Mutianyu Great Wall mainly received visitors from other foreign and domestic cities. Due to the epidemic, the site now sees more tourists from Beijing," said Luo Xing, executive deputy general manager of a tourism service company which operates the site.

On the first day of the holiday, around 5,000 tourists visited the Great Wall site of Mutianyu, nearly twice the average daily visits on weekends since it reopened on April 10, Luo said.

Authorities have urged the safe and orderly reopening of tourist sites across the country, stressing that efforts should be made to control passenger flows, prevent the gatherings of crowds, implement reservation systems and raise public awareness of epidemic prevention and control.

The Ministry of Culture and Tourism and the National Health Commission recently released a circular, requiring tourist sites that resume operation should receive no more than 30 percent of their daily visitor capacity and indoor tourist sites should remain closed amid the epidemic.

Scenic spots in Beijing are now adopting an advanced real-name booking system to limit crowds. Tourists should have their temperature checked, show a health code upon arrival and wear masks during their visit.

Huangpi District in the central Chinese city of Wuhan, home to many top tourist attractions, was well prepared for the holiday. On a poster at the entrance of famous tourist site Mulan Grassland, the cartoon figure of Chinese folklore heroine "Mulan" wears a mask as an interesting reminder for tourists to protect themselves and others.

"Please show your health code and maintain a distance of no less than 1.5 meters," a security guard said to tourists standing in queues at the entrance. When the site saw a tourist peak at noon of May 1, the first day of the holiday, it immediately opened new gates for entry to avoid crowds.

The travel increases during the May Day holiday, one of China's peak tourism periods each year, would help lift the tourism and hospitality sectors that have been hit hard by disruptions from the outbreak of COVID-19.

The China Tourism Academy estimated that domestic visits will see a reduction of 932 million in 2020 while the number will plummet in the first quarter -- a negative growth of 56 percent compared with that in 2019. Tourism-driven revenues will drop by 1.18 trillion yuan this year.

China's tourism sector is seeking long-term development to offset losses brought by the COVID-19 epidemic, with smarter infrastructure and live broadcast provided by many scenic spots.

Also, some hotels begin to cooperate with travel agencies to overcome the challenge. Sansa, a homestay near Mutianyu Great Wall, is in talks with a travel agency about launching a promotional package tour product to lock in more tourists, according to its general manager Wu Meijian.

The fundamentals of China's long-term growth in the tourism sector will remain unchanged, said Dai, noting that as long as the tourism companies can enhance product innovation and adjust market strategy in this special period, they can get through the tough times.

"The tourism industry is closely related to dining, hospitality, transportation, shopping and entertainment sectors. The May Day holiday is a very good opportunity for the recovery of epidemic-hit tourism industry," said Hu Daohua, a tourism expert from the Hubei University. "The gradual recovery of the tourism industry will drive the development of the whole industrial chain, stimulate consumption and stabilize the economy."