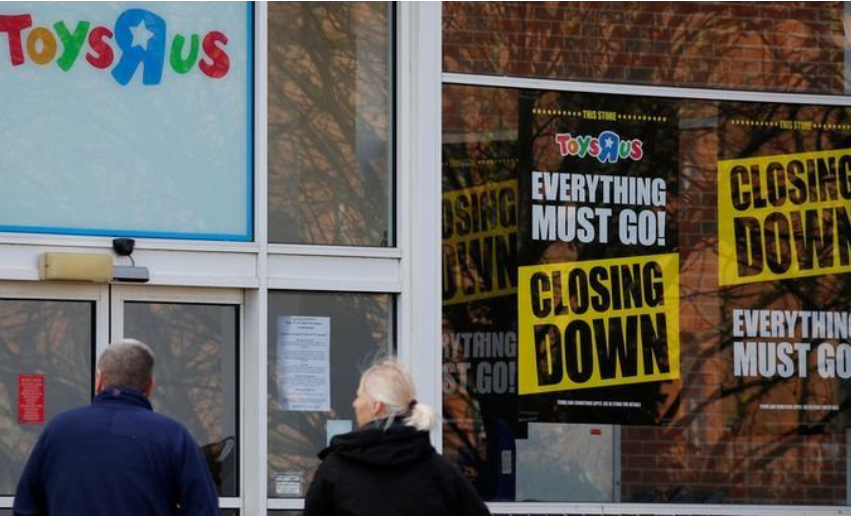 Closing down signs are seen outside the Toys R Us store in Liverpool, Britain, March 19, 2018 (Photo: Reuters)

The US toy industry looks set for a flurry of mergers and acquisitions between smaller toy makers in the aftermath of the Toys ‘R’ Us bankruptcy, as they seek more scope and negotiating power with big box retailers Target (TGT.N) and Walmart (WMT.N).

Smaller toy companies that traditionally relied on Toys ‘R’ Us as a launch platform to sell and promote products, say it is difficult to develop relationships with mass retailers, which now have the country’s biggest toy departments.

“A lot of the smaller niche brands that you’d buy because you’d seen (them) while browsing in Toys ‘R’ Us are going to be hit very hard.” With Toys ‘R’ Us out of the picture, retail power has shifted to Walmart, Target and Amazon, said Jackie Breyer, editor-in-chief of industry magazine The Toy Book.

Consolidation helps smaller toy firms get their name out and get products on shelves as they will have a bigger portfolio of products for a mass market retailer to choose from, she added.

The total value of deals in the US toy industry has soared to $962.7 million since Toys ‘R’ Us filed for bankruptcy on Sept. 19 last year, compared to $85.4 million in the same period a year ago, according to Thomson Reuters data.

Of the 19 deals in the US toy industry since the bankruptcy, the biggest was Hasbro Inc’s (HAS.O) $522 million purchase of franchises, including Power Rangers and Julius Jr from Saban Properties LLC, the Los Angeles-based firm credited to have launched the “Mighty Morphin Power Rangers” live-action TV show in 1993.

Spin Master declined to comment, while Hasbro said its acquisition was not because of the retailer’s bankruptcy.

More generally, mergers and acquisitions in the consumer products and staples space have racked up their strongest opening to a year since 2008, with more than $216 billion spent globally, according to Thomson Reuters data. The total value of deals is up 33.6 percent over the same period last year.

“HUGE GAME CHANGER” Collectible toys maker, The Loyal Subjects’ Chief Executive Officer Jonathan Cathey said he has seen an increase in interest since the bankruptcy, and has had at least two potential buyers pursue his California-based company. Chief Executive Officer Jay Foreman of Florida-based toy maker Basic Fun! said talks of consolidation between his firm and smaller players have “easily tripled” since September. “Toys ‘R’ Us is really a huge game changer,” Foreman said, whose firm bought K’Nex and Geoworld since Toys ‘R’ Us went bust. The toy retailer’s bankruptcy and subsequent liquidation of its over 700 US stores in March was the largest collapse in a year that saw record store closures and a fundamental shift in once-reliable brick-and-mortar retail models. “More companies are now questioning, where are the biggest opportunities to sell toys,” said Kate Clark, founder and president of Paddington bear toy maker, Yottoy Productions Inc. “Unfortunately, some toy companies may struggle greatly and some may not survive.” According to market research firm NPD Group, US toy sales topped $20 billion last year. Mattel and Hasbro together accounted for 25 percent and small players made up as much as 40 percent.

Toys ‘R’ Us alone had accounted for 12 percent of all toy sales nationwide, according to NPD Group. But toy sales in the US have been slowing and with Toys ‘R’ Us gone, toy makers have lost an incubator for new and experimental toys that other retailers were not willing to bet on. “As an entrepreneur who was starting a toy company, they (Toys ‘R’ Us) were always the one that were willing to take chances and buy a broader array of products,” said Michael Rinzler, founder of Wicked Cool Toys that makes Cabbage Patch Kids and Teddy Ruxpin bears. Industry observers say that points to the power lying firmly with a handful of big players in the sector. “When you’re a smaller sized company ... do you say that maybe it’s a better strategy (to) merge with another company or to perhaps to be acquired so that you get more scale?” said Bob Wann, who is the chairman of the Toy Association in the United States and the CEO of toy company PlayMonster. “I think more companies will think about considering that than perhaps they did in the past.”