Trade talks with Australia unlikely, unnecessary at the moment: expert 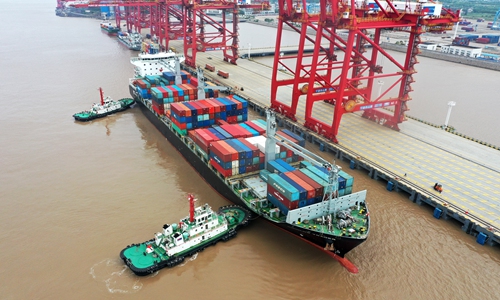 Trade talks with Australia are unlikely and also unnecessary at the moment, a Chinese trade expert said on Wednesday.

Australian Minister for Trade Simon Birmingham is pursuing urgent trade talks with his Chinese counterpart after key agriculture exports were hit with suspensions and tariff levies, but he reaffirmed that Australia will not stop pushing for an independent inquiry into the coronavirus outbreak, Reuters reported.

Birmingham's call came after media reported that Australia was concerned about potential tariffs on its barley exports which are under anti-dumping and anti-subsidy investigations and China's recent beef import suspension.

"Despite Australia's demanding an independent probe into COVID19 outbreak, which has angered Chinese people, Beijing hasn't imposed any trade sanctions against Australia. I think now it's unnecessary for China to hold talks [with Australia]," Yu Lei, a chief research fellow at the Research Center for Pacific Island Countries at Liaocheng University, told the Global Times.

The pause of importing Australian beef from the four Australian meat processors is due to their inspection and quarantine breaches, and the barley investigations started more than a year ago; and those actions "are not related to Australia's unfriendly moves", said Yu.

However, bilateral relationship between China and Australia have soured in recent years, with a series of hostile actions taken by Australia, including Australian government's discriminatory moves to shun Huawei and ZTE, its stance on the South China Sea, and its latest COVID-19 posturing, Yu said.

"COVID-19 could have originated from anywhere in the world as it jumped from a host animal to humans. It doesn't make any sense for Australia to demand an independent probe into the outbreak in China," a political analyst surnamed Li told the Global Times.

"The majority of Chinese people definitely thinks such an investigation, as pursued by Canberra, is politically oriented and designed to stigmatize China. Now, Chinese people are angered by the political posturing of the Australian government. They want Chinese government to be harsher towards Canberra," Li said.