Trade tensions could cut global GDP by $700B: IMF chief 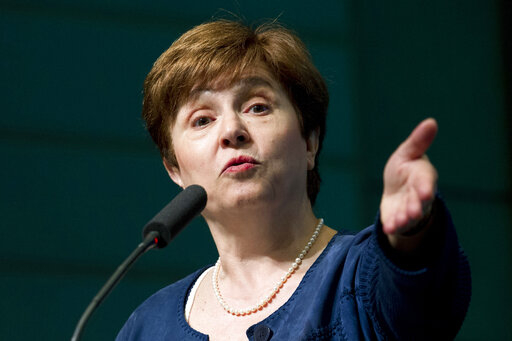 "For the global economy, the cumulative effect of trade conflicts could mean a loss of around 700 billion U.S. dollars by 2020, or about 0.8 percent of GDP," the IMF managing director said at an event at the global lender's headquarters ahead of the annual meetings of the IMF and the World Bank next week.

"As a reference, this is approximately the size of Switzerland's entire economy," said the Bulgarian economist, who succeeded France's Christine Lagarde and took office on Oct. 1.

The U.S.-China trade conflict has not only increased direct costs on businesses and consumers, but also caused secondary effects, such as the loss of confidence and market reactions, said Georgieva, who is the former chief executive officer of the World Bank.

"The results are clear. Everyone loses in a trade war," said Georgieva. "So we need to work together, now, and find a lasting solution on trade."

Noting that the global economy is in a "synchronized slowdown," the new IMF chief called for a "synchronized policy action" to accelerate growth and build more resilient economies.

Georgieva, who has been a champion in the global fight against climate change, also said one of the priorities of the IMF is to assist countries as they reduce carbon emissions and become more climate resilient, urging countries to adopt "a significantly higher carbon price."

New research at the IMF confirms that carbon taxes can be one of the most powerful and efficient tools, Georgieva said. "But the key here is to change tax systems, not simply add a new tax," she added.

"I am confident that if we cooperate -- mindful of each other's challenges and interests -- we can deliver a better future for all," she said.