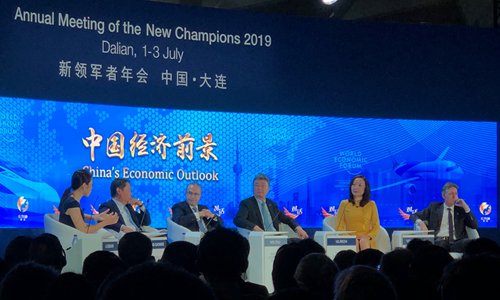 China's economy is faring relatively well despite the difficulties brought by the China-US trade war, executives and experts said at the ongoing Summer Davos 2019 in Dalian, Northeast China's Liaoning Province on Monday.One outcome of the trade war could be a bunch of awakened Chinese companies significantly improving their technological knowhow to become global leaders, forum attendees said.The disruptions Chinese companies have had to deal with over the past two years have been a wake-up call, said Ning Gaoning, chairman of Sinochem Group, at a seminar at the World Economic Forum (WEF)'s Annual Meeting of the New Champions 2019, also known as Summer Davos.Chinese firms have been experiencing challenges since the US began a trade war with China in 2018. The US government has ordered some US companies to stop supplying key components to Chinese technology companies, including global telecommunication leader Huawei. "Awakened, I see every industry is changing the way it attains growth," said Ning, who has been at the helm of four large-sized centrally administered state-owned enterprises.Former IMF Deputy Managing Director Zhu Min echoed Ning's remarks by adding that Chinese companies will experience a significant uplift in quality in the coming decade as a more rational development concept has been established in the minds of Chinese businesspeople. "China will become an innovation-driven economic power," Zhu said at the same seminar.In a sign of resilience, China's first-quarter GDP beat market expectations, rising 6.4 percent year on year.China's actual use of foreign direct investment in US dollar-denominated terms also increased 3.7 percent year on year to $54.61 billion in the first five months this year, official data from Ministry of Commerce showed. Notably, US investment in China grew 7.5 percent year on year.However, the ongoing trade war is still casting uncertainty in business circles."Now a lot of companies between China and the US are trying to delay investment decisions, both ways," Timothy Stratford, a former assistant US trade representative for China affairs, told the Global Times on Monday.Mari Elka Pangestu, former minister of trade of Indonesia, said one result of the trade war would be China and ASEAN working closer toward a higher degree of integration."It will increase trade, as well as investment between the two sides. Further regional integration is part of the answer to Plan B," Pangestu told the Global Times on Monday, referring to the situation when China and the US could not agree on a deal.Experts at the seminar also warned that China needs to watch its demographics, and make sure that consumption moves fast enough to offset any downward effects. Low industrial automation levels are currently China's weak points, according to Kevin Sneader, a global managing partner at McKinsey & Company.China is expected to comprehensively open its market to the world and in the future it may even develop into a country with zero-tariffs, said Ning.