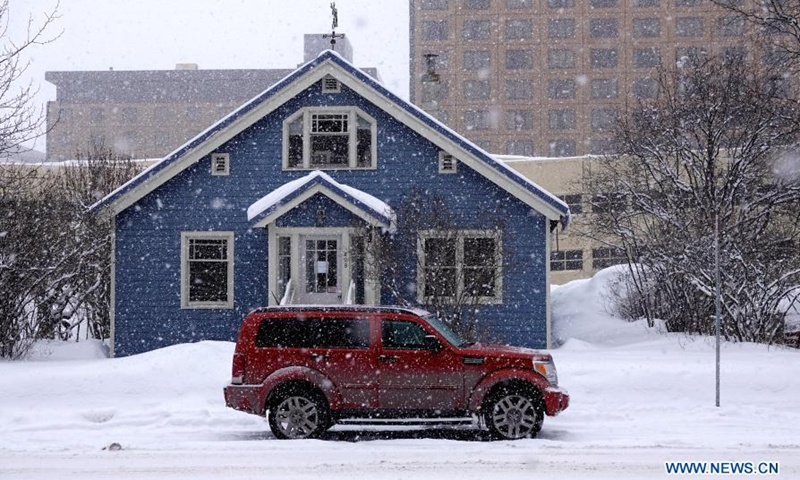 A vehicle moves in snow in Anchorage, Alaska, the United States, on March 15, 2021. A heavy snowfall hits Anchorage on Monday. (Photo:Xinhua)

Alaska's dwindling exports to China, including seafood and timber, show the need for the US to stop its tariffs war with China, a Chinese expert said on Friday, as the two countries' high-level delegations met in the US state.

Analysts said the place where the high-level meeting is taking place is a perfect reminder of the lose-lose situation caused by the US-initiated trade war, as Alaska's exports to China have withered starting 2018.

Voices are running high from Alaska, with the Anchorage Daily News (ADN) running an opinion piece that "encourages the Biden administration to include issues related to the trade of seafood and timber in its discussions, which are important economic drivers in Alaska."

Former Alaska Governor Bill Walker pointed out in an interview with Chinese news portal ifeng.com that China has been the largest trading partner for Alaska for the past 13 years, as well as the state's biggest market.

"I am surprised that this tariffs situation has being going on for as long as it has, and I am hoping we have a chance to restart," Greg Wolf, executive director of World Trade Center Alaska, said in an interview with Chinese state broadcaster CGTN on Thursday.

Since the Trump administration started a tariffs war with China, Alaska's seafood trade, which used to have China as its largest buyer, was caught in the crossfire.

Seafood is Alaska's No.1 export, totaling more than $5 billion in annual economic activity and a significant economic driver for the state.

China imposed up to a 37-percent levy for US seafood in retaliation of US tariffs on Chinese goods.

That caused the US seafood sector to miss out on a 35-percent jump by China for global seafood from 2017 to 2020 and plunged Alaska's seafood exports to China by 46 percent from a high in 2017, when trade was worth $1 billion.

A sales representative of a Shanghai-based seafood company said all the seafood imports from Alaska have stopped since the trade war started.

"We used to import huge loads of US seafood," the person told the Global Times on condition of anonymity on Friday. "Nowadays, we have none of them. Instead, we import them from Russia."

"Not only did the red king crab from Alaska become a trade war victim, lobsters from northeastern US states as well as brown crabs were all affected," the person said. "All because of the trade war."

For timber, China has placed a 20-percent tariff, and local jobs have been shed as a result, according to the ADN.

Chinese experts pointed out that on the matter of tariffs, China is patient.

China will not make any positive moves on tariffs, given China has now taken more efforts on its "dual circulation" strategy to boost market demand, Tian Yun, vice director of the Beijing Economic Operation Association, told the Global Times Friday.

China's "dual circulation" development paradigm, in which domestic and overseas markets reinforce each other, puts the domestic market in front.

The Chinese market has many alternatives to Alaska seafood imports, and other countries are also strengthening their exports to China as US dollar liquidity is expected to tighten in the coming days, and China will have more countries for seafood imports.