BUSINESS Trade war not good for US tourism

Trade war not good for US tourism 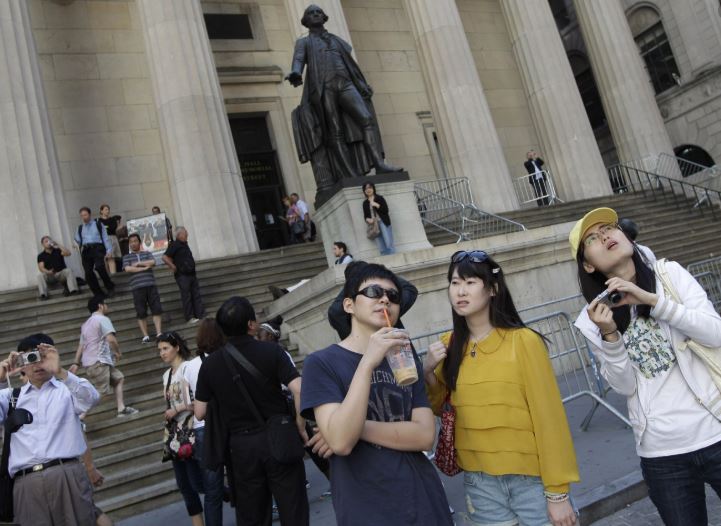 Washington (People’s Daily) -- A day after levying more tariffs on hundreds of billions of dollars’ worth of Chinese goods, US President Trump flew to France on Saturday to join leaders from Britain, France, Germany, Italy, Canada and Japan for the three-day G7 summit. While economists are closely watching for signs of the trade war’s long-term damage to the US economy, the Trump administration's bitter trade feud with China could deliver another economic blow by quashing Chinese tourism to the US.

Chinese tourists make up the third-largest market for travel to the US and spend an average of $5,800 per visit—more than any other nationality. By comparison, visitors from the UK, the largest market for arrivals to the US, spend roughly $2,500 per person.

After several years of double-digit growth, however, the flow of Chinese visitors to the US has already diminished since the conflict started in early 2018. Chinese visitor numbers rose only 4 per cent in 2017, and in 2018 inbound visits from China to the US fell 5.7 percent compared to the previous year—that was the first decrease in arrivals from China in 14 years, resulting in a loss of roughly $2 billion in spending in the US.

Unfortunately, the trend is continuing. Inbound travel from China to the US was down 2.2 percent for the first six months of 2019 compared to the same period a year ago. Nearly 650,000 fewer visits are expected for the whole of 2019—another $3.8 billion in lost spending. Continuing tensions are projected to result in 2 million fewer Chinese tourists through next year, according to a new estimate from Tourism Economics, an Oxford Economics company. Over two years, that adds up to $11 billion in lost revenue. While such dollar figures are a fraction of the $20 trillion US economy, they are meaningful to local economies, especially for smaller businesses that cater to tourism and at a time economic growth is slowing.

Tourists from China hold special appeal for US business because of how much they spend. Including the cost of flights and accommodation, each one splurges on average $7,000 per visit, according to data cited by the US Travel Association. While Chinese nationals accounted for fewer than 8 percent of overseas visitors to the US in 2018 compared with almost 12 percent who came from the UK, according to the National Travel and Tourism Office, they contributed more to the US economy than those from any other country.

Macy’s, the leading US department store chain, blamed a 9 percent drop in sales from international tourists for an unexpectedly weak second quarter that prompted the chain to warn on full-year profits. Jeffrey Gennette, the company’s chief executive, said overseas visitors were an important contributor in popular destinations such as New York. The fall-off was a particular problem, he said, since sales to tourists were very high-margin, they’re more apt to buy at full price, and there are virtually no returns

“We’re really focused in these 40 stores on what we can do to offset that decline in business from Chinese tourists,” he said.

Tiffany’s revenues dropped about 25 percent in its first quarter from a year ago. The company, whose shares have fallen 11 percent in the past six months, said the decline from Chinese tourists was even steeper. A broader slowdown is also contributing to the decline in tourists. Mark Hoplamazian, chief executive of Hyatt Hotels, told analysts earlier this month that economic conditions in China had weighed on demand, along with trade tensions with the US.

Bank of America Merrill Lynch issued a report in June, estimating a “worst-case scenario” of as much as a 50 percent decline in Chinese travel to the United States. Its analysts said that could mean an $18 billion hit to the American travel industry.

“For right now we’re holding to our 2018 numbers, but we are starting to see some indicators that are showing some softening in the first quarter,” said Christopher Heywood, executive vice president of global communications for NYC & Company, the city’s tourism marketing organization. The trade war and visa issues “are concerning to us,” he said. “All of the hurdles could translate into unintended consequences.”

"The Chinese tourist is important to the US because China ranks No. 1 in revenues generated from travel," said Larry Yu, professor of hospitality management at George Washington University. "Here in DC, China is the No. 1 overseas market. It's quite significant for economic contributions to local destinations."

"The loss in visitors is real," said Tori Barnes, executive vice president of Public Affairs and Policy at the US Travel Association. "So, we think that the sooner the governments can end the trade dispute, the better it will be from an economic standpoint."