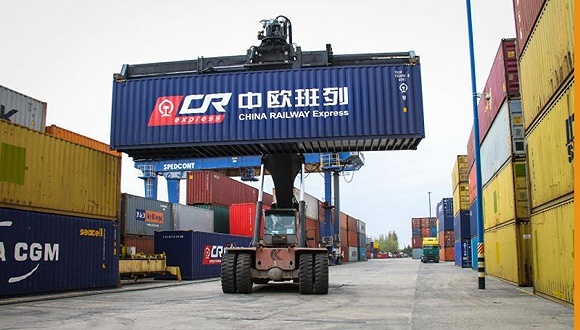 E-commerce giant Alibaba's online shopping platform Tmall is turning to the China-Europe express railway service to goods, which is expected to strengthen deliveries of purchases made during the shopping festival.

Singles Day, which takes its name from the date, Nov 11, or 11/11, is China's largest online shopping event. Last year during the event, which has grown to encompass much of the month, consumers spent 1.48 trillion yuan ($224 billion) buying goods online. Alibaba, which launched Singles Day in 2009, had sales of 268.4 billion yuan during the promotion last year, up 26 percent year-on-year.

On Tuesday, a train carrying 200,000 Tmall packages, including digital products, gym equipment and daily necessities, departed from the Alataw Pass, Xinjiang Uygur autonomous region. It marked the launch of the new consumer goods delivery service, said Xie Zhiyu, a manager of Alibaba's logistics arm Cainiao Network. The Alataw Pass is a major rail port at the China-Kazakhstan border in Xinjiang.

The packages, which will arrive in Europe in 10 days, will then be distributed to over 20 countries by truck, Xie said.

More than 4 million Tmall parcels are expected to be delivered to Europe from Nov 1 to 20 via trains from Zhengzhou, Henan province, and Yiwu, Zhejiang province, via the Alataw Pass. The pass serves more China-Europe freight lines than any other route in China, and it has gained favor with cross-border e-commerce companies for westbound exports.

Wang Chuanjie, a customs officer at the Alataw Pass, said from January to the end of October, more than 4,000 China-Europe freight trains traveled through the Alataw Pass.

An average of 15 China-Europe express cargo trains travel every day through the pass, making it the port handling the greatest amount of such cargo in China, he said.

The pass started its China-Europe freight train service in 2011. There are 22 lines running through the pass, connecting 62 domestic cities with 59 cities in 13 foreign countries.