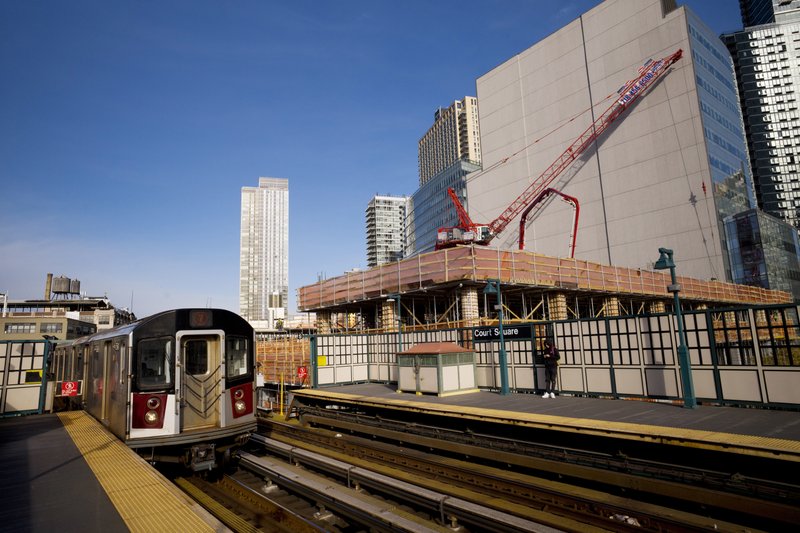 Commuters beware: New York and Washington’s clogged streets and creaky subway systems are about to feel more pain as 50,000 more people descend on the two metro areas where Amazon will open new headquarters.

An expansion of that scope in a city such as New York — where the regional subway, bus and commuter lines move more than 8 million people every day — sounds like something a transit system should be able to absorb.

Not so, some experts say.

“Congestion will get worse. Buses will probably get a little bit slower. There are going to be more people traveling at a specific time of day to a specific place,” said Eric Guerra, assistant professor of city and regional planning at the University of Pennsylvania. “But at the same time, they will create a lot of jobs where people are.”

Long Island City, the New York City neighborhood that will be home to one of the new headquarters, sits across the river from the busy world of midtown Manhattan. The growing neighborhood is crisscrossed by subways and buses and surrounded by residential neighborhoods. The other headquarters will be in the Washington suburb of Arlington in northern Virginia, a part of the country known for its mind-numbing traffic.

Amazon said hiring at the two headquarters will start next year, but it could take a decade or more to build out its offices. Still, the complaining has already begun.

Among the sticking points — Amazon has won the rights to a helipad at its Long Island City location, allowing some senior executives to get through rush hour in style, though the company had to agree to limit landings to 120 per year.

“For the city and state to greenlight a helipad for the wealthiest man in the world and one of the richest corporations in the world is a slap in the face to all New Yorkers, but particularly the people in Queens who have to fight to get on the 7 train in the morning,” said City Councilman Jimmy Van Bramer, a Democrat who represents Long Island City. “And furthermore, if there were 25 to 30,000 Amazon employees in Long Island City, that fight to get onto the train is going to get a lot more intense.”

Frustration levels already are high among New York City subway riders. More than a quarter of residents spend more than an hour getting to work, and 57 percent ride public transit to commute, according to the U.S. Census Bureau.

A key subway line that runs through Long Island City has been often criticized for delays, though long-awaited upgrades to allow trains to run more frequently are on track to finish as soon as this month, and a new ferry connection to Manhattan opened in August. Still, Van Bramer insisted the area is not sufficiently well served, and there are complaints about noise pollution from helicopters and sea planes.

“The entire city is in a mass transit crisis and nothing that I’ve seen about this deal makes me think it will help,” New York City Council Speaker Corey Johnson said at a press conference Wednesday. “Western Queens transit infrastructure is already strained and the 7 train in particular is a mess every morning, so this definitely adds to existing transportation concerns.”

New York City commuters have been clamoring for subway improvements for years, and some on Wednesday tweeted photos of packed subway stations near Amazon’s proposed new office and reported having let several overcrowded trains go by before they were finally able to squeeze into one.

Some see the dire warnings about New York’s transit system as premature.

“Even as stressed as our system is right now, an investment in growth of this magnitude doesn’t overwhelm the transportation network because it’s such a robust and large system,” said Tom Wright, president and CEO of the Regional Plan Association, an urban research and advocacy organization.

Washington, D.C.’s subway system, which will serve Amazon’s headquarters in Arlington’s Crystal City, is at capacity on many lines and has serious maintenance problems, said Tom Rubin, a transportation consultant based in Oakland, California. Repair work to the subway station closest to Amazon’s new office resulted in a disastrous commute last week as people missed flights and stood in long lines for buses that never arrived, said Thomas Cooke, professor of business law at Georgetown University’s McDonough School of Business.

In fact, fires have broken out so many times in Washington D.C.’s Metro system that a developer created a Twitter account to automatically tweet suspected fires in stations.

“We have an embarrassing metro system here that I hope will benefit by this relocation,” Cooke said, adding that taxpayers will be footing the bill for the transit improvements that Virginia agreed to in its deal with Amazon.

Development along major highways in Northern Virginia and Washington have led to “unreasonable traffic delays on a daily basis” in the past few years, with drive times that used to take 40 minutes ballooning to up to 90 minutes, Cooke said.

In the nation’s capital, more than a third of commuters ride public transit and most commuters spend at least a half-hour getting to work, according to the Census Bureau. Commuters in the suburbs surrounding Washington face even longer commute times.

Elsewhere, companies use van pools and private buses to entice talented employees who want to live in hipper neighborhoods away from their offices. Google and Yahoo began running private buses from downtown San Francisco and elsewhere to their headquarters in Silicon Valley more than a decade ago. In the Los Angeles area, Disney, Nickelodeon and Warner Bros. run shuttle buses to carry employees from public transit stations to their Burbank studios, said Keith Millhouse, a transportation consultant and principal at Millhouse Strategies.

Some hoped Amazon would invest in transit upgrades as part of the deal. But it’s hard to imagine Amazon volunteering to chip in for transit improvements when so many cities — 238 submitted proposals — were competing for the company’s second headquarters, Guerra said.

“If anything, they’re getting benefits out of it,” Guerra said. “They’re unlikely to be paying for new services.”