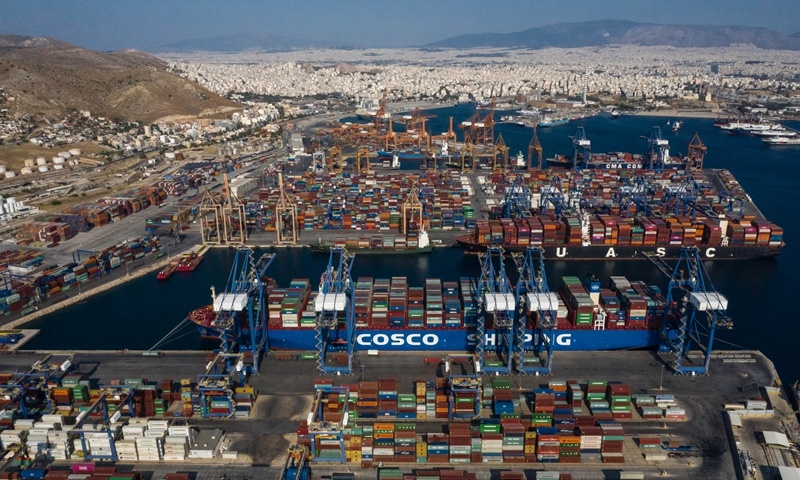 Aerial photo taken on Sept. 6, 2019 shows a cargo ship of COSCO SHIPPING Lines transporting Italian products to participate in the 2019 China International Import Expo (CIIE) to Shanghai, where the CIIE will be held, berths at the Port of Piraeus, Greece. (Photo: Xinhua)

A continued spike in ocean freight costs for shipments from China to the US has aroused regulatory concern, with China's Transport Ministry reportedly considering tougher oversight of China-US shipping routes to avoid drastic swings in shipping costs.

The Ministry of Transport summoned all container shipping lines, operating ocean freight routes between China and the US after sending them letters of inquiry, Chinese financial news site caixin.com reported on Wednesday.

The ministry will toughen regulation over China-US shipping routes, requiring shipping lines to put on record and specify their designated rates and all additional charges, according to the report, citing people close to the matter.

COSCO SHIPPING Lines has moved to add capacity, said the report, citing an unidentified insider. To stabilize shipping rates as quickly as possible, the line has no choice but to resort to ship rental companies for "vessels working overtime" to be available for China-US and South American routes, the insider, said, describing the fleet the line currently rents as large.

The summon was not intended to intervene in market shipping rates, but to guide shipping firms to stabilize exports, so as to avoid large short-term rate swings in either direction. If shipping rates continue to soar, the regulatory authorities will launch an investigation, the insider disclosed.

The transport ministry didn't reply to a request for comment as of press time.

"We have felt slightly busier over the past two months than before as the Christmas season is approaching," Huang Jinyun, general manager of Shenzhen-based smart-watch maker Aibaohu Tech Co, told the Global Times on Wednesday.

The company's exports to the US have been up roughly 10-20 percent, according to Huang, and Christmas-related items take the lion's share of its products. Exports to Europe and the US account for 40 percent of its total exports and the US alone makes up 15-20 percent.

The robust demand for Chinese goods stands in contrast with insufficient shipping capacity. The cost of shipments to the US, for Huang's company, has jumped about 10 percent, although that's down from a 40-percent surge in April-May. Further, freight shipping takes a long time now, affecting the company's collection of outstanding payments.

The cost of container shipments from Shanghai to the West Coast of the US more than doubled to $3,348 per 40-foot equivalent unit (FEU) container in August from an average of $1,530 per FEU throughout 2019, according to Shanghai-based news portal thepaper.cn, citing Shanghai Ship Exchange.

Rates are also rising for shipments to other destinations, said a Chinese import-reliant miscellaneous goods merchant in Mexico City who gave his surname as Yu. This, added to the yuan's strength against the US dollar, dents importers' margins, he said.