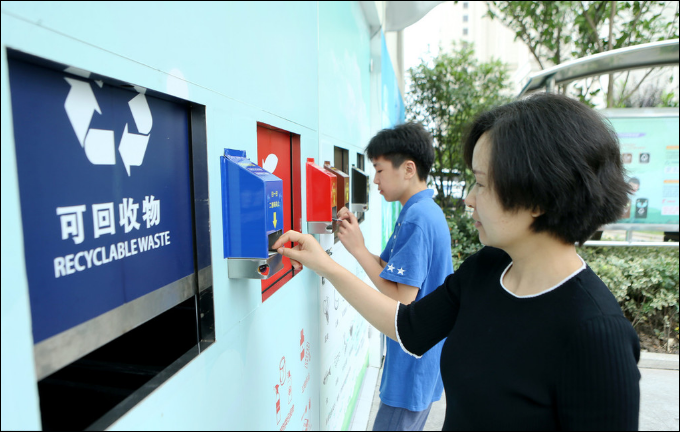 Local residents use QR code cards to open different bins for their garbage at a waste collection point in Shanghai, June 19, 2019. (Photo: IC)

As China launches garbage sorting work among cities at the prefecture level and above this year, some wonder whether an opportunity to invest is presenting itself.

A listed job to inspect garbage sorting could have a salary of 400 yuan ($58.24) per day, and there were 53 new registered garbage sorting companies by the last week of June according to news website 21jingji.com.

The sanitation market will be 200 billion yuan in the future, the website said, citing an industry insider.

China's solid waste clearance volume is only one-third of the US' figure, and the marketization of the sanitation industry is less than 30 percent, the website asserted, citing Zhang Xiaowen, deputy managing director of investment management department under Everbright Financial Holding Asset Management.

At present, China's garbage sorting industry has not yet built up a giant company, and the country will have one in the future, industry insiders told the website.

The gross profit margin for the US' three giant garbage sorting companies are 30 to 40 percent and each has healthy cash flow, while China's sanitation industry only reaches 6 to 10 percent, Zhang said.

The sanitation industry in China is in an expansion phase with tight cash flows, and the industry has plenty of room to develop in the Chinese market, she added.

Garbage clearance and transportation needs qualification licenses, which are given by the government in China.

Furthermore, achieving large-scale development and standardized operation in the industry are questions for startups to explore, the website said.

In June an official with the Ministry of Housing and Urban-Rural Development, said the country will invest 21.3 billion yuan in the construction of garbage processing facilities, and by 2025 all 300 Chinese cities at or above the prefecture level shall complete the building of garbage sorting and processing systems.