Blockchain technology has the potential to shake up the travel industry by giving airlines and hotels a way to bypass controlling intermediaries like Expedia or Amadeus, and gain better access to customer data. 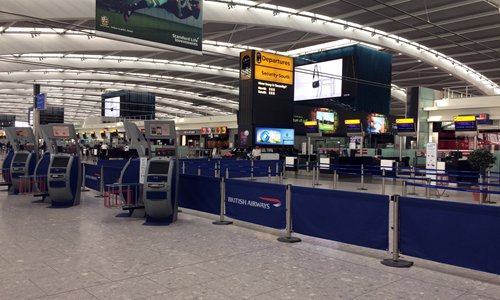 A view of check-in desks at Terminal 5 of London's Heathrow Airport after flights were canceled on May 27, 2017. (Photo: IC)

Major players including Lufthansa and citizenM hotels are partnering with start-ups and talking to large corporate clients about whether they can do group bookings via blockchain instead of using middlemen, who charge up to 25 percent of ticket or room prices in fees.

Blockchain, which functions as an online record-keeping system maintained by a group of peers rather than a central agency or authority, also offers new business opportunities in tracking bags and flight delays.

Because transaction data is openly available and not controlled by any one party, blockchain offers an opportunity to build new platforms that can connect travel providers and customers more directly and replace decades-old technology. 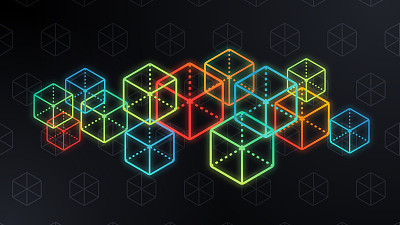 "We see a lot of business potential from the very nature of blockchain being decentralized by construction, removing the middleman by design. That looks very fruitful potentially," said Xavier Lagardere, head of distribution at Lufthansa Group Hub Airlines.

The travel industry joins financial, mining, energy trading firms and others in looking at the potential for blockchain technology when it comes to simplifying processes, cutting out middlemen or tracking goods.

One travel blockchain company that has partnered with major players including Lufthansa, Air New Zealand and Netherlands-based citizenM hotels, is Swiss nonprofit Winding Tree, whose distribution platform is so far targeting companies rather than consumers. 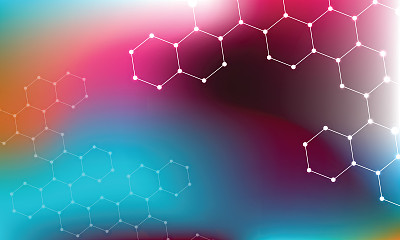 It allows airlines and hotels to publish available inventory to customers without needing systems that aggregate data on flights and rooms, and could therefore allow them to avoid the fees they currently pay for the use of such systems.

Currently, such systems are provided by intermediaries like global distribution systems (GDS) providers - such as Sabre, Amadeus and Travelport - whose real-time inventory technology is used by travel agents, by corporate travel bookers, or by consumer-facing online travel agencies (OTA) like Booking Holdings and Expedia Group.

Reducing commission fees, which can reach up to 25 percent of the price of a hotel room for example, is an ongoing battle, as is access to customer data, with some airlines complaining that they don't get passenger contact details from third parties, crucial when delays occur.

Hotels group Marriott said this month that it was looking to lower the commission it pays to online travel agencies, starting with Expedia.

Lufthansa in 2015 introduced a fee for bookings made via GDS companies of 16 euros ($19.78), and its rivals International Airlines Group (IAG) and Air France-KLM have also renegotiated contracts.

Winding Tree CEO Maksim Izmaylov said the travel intermediaries may have to adjust their business models as a result of the new technology, mainly by rethinking their fees.

"Those big companies don't have to go away but the rules of the game are changing," Izmaylov said, adding Winding Tree wanted to collaborate with the intermediaries too.

He said OTAs could be forced to drop their fees to around 5 percent from levels of around 20 to 25 percent currently.

GDS companies, the first of which were created by the airline industry in the 1960s, have put on a brave face, saying they offer more services and real-time pricings for distribution that blockchain technology couldn't provide.

"There will always be a need for someone to aggregate offers and enable multi-sourced shopping. I don't think blockchain resolves that," said Philip Likens, director of Sabre Labs. His comments were echoed by representatives of Amadeus, Travelport and technology company SITA.

"You can't have a real-time environment if you have to wait 10 minutes for the transaction to be committed," he said.

Ctrip, China's biggest online travel company, is looking into blockchain itself, though, like others, said the computing power is lacking at the moment.

"Right now, retrieving blockchain codes takes a long time, so the efficiency needs to be increased and the cost needs to go down," Ctrip CEO Sun Jie said.

Booking.com CEO Gillian Tans said blockchain could make it easier for the company to connect to properties and attractions.

"Eventually customers will benefit from that as well," she noted.

Meanwhile, travel technology companies are exploring how they can use blockchain themselves to provide new services to their customers, although they are being careful of the hype.

"We want to be diligent to find the best applications for this technology. It can become a problem that blockchain is the new fancy hammer and we're looking for a nail," Sabre Labs' Likens said.

Air transport technology specialist SITA has worked with Heathrow Airport and British Airways owner IAG to test whether blockchain could be used for sharing of flight data and to keep passengers updated.

Kevin O'Sullivan, lead engineer at SITA Lab, said it was hard to nail down what the status of a flight was when you have two airports and one airline involved in any individual flight, each with its own operating database.

"If you have the top 50 to 100 airlines and airports putting data on blockchain, then you have a masterset for the industry that's consistent and managed by industry governance rules for flight status. That would solve a genuine problem," he said.

"Because it's blockchain, we know there's a single version of the data shared with all the parties and crucially everyone knows they're looking at the same data set."

The International Air Transport Association (IATA) is testing blockchain for payments via its billing system that connects airlines and ticket agents, and says it could be cheaper than payment solutions offered by third-party payment tool PayPal, for example.