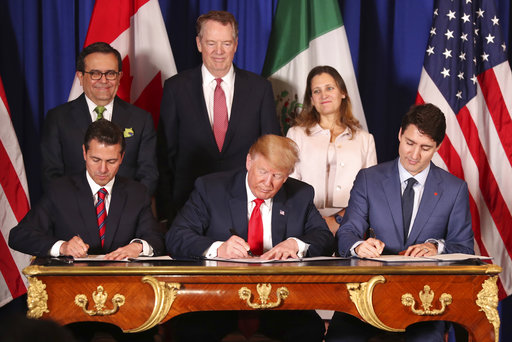 US President Donald Trump, center, sits between Canada's Prime Minister Justin Trudeau, right, and Mexico's President Enrique Pena Nieto as they sign a new United States-Mexico-Canada Agreement that is replacing the NAFTA trade deal, during a ceremony at a hotel before the start of the G20 summit in Buenos Aires, Argentina, Friday, Nov. 30, 2018. (Photo: AP)

The Trump administration has triggered the process for submitting a bill to Congress that would implement the president’s new trade deal with Canada and Mexico.

They say it will not speed up consideration of a bill to replace the North American Free Trade Agreement.

The procedural step undertaken Thursday must be made at least 30 days before the administration can submit its legislation to implement the United States-Mexico-Canada Agreement.

Vice President Mike Pence says Thursday’s action is “all about moving forward on an agreement that we know is a win.”

But Pelosi is describing the administration’s efforts as “not a positive step.” She says Thursday’s move “indicates a lack of knowledge” on how to pass a trade agreement.