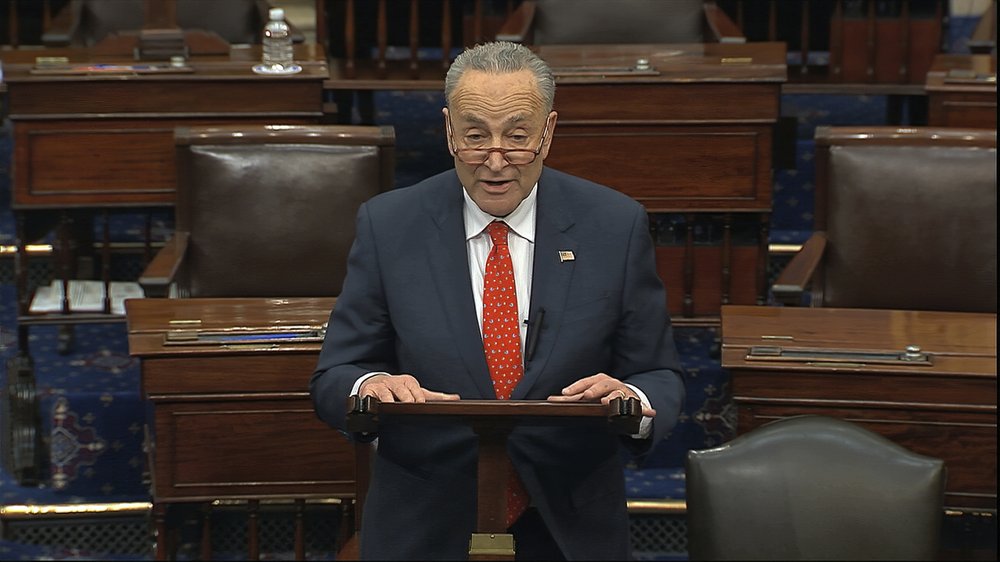 In this image from video, Senate Minority Leader Chuck Schumer, D-N.Y., speaks on the Senate floor at the U.S. Capitol in Washington, Wednesday, March 25, 2020. (Photo: AP)

Unable to strike a deal alone, the Trump administration and congressional leaders appear poised to launch new bipartisan talks on a fresh coronavirus aid package with hopes for action as soon as next week.

House Speaker Nancy Pelosi in a separate call with Mnuchin recommended the joint talks so Congress “can move expeditiously” past the logjam.

“We’ll have to do that again at some point,” acknowledged Senate Majority Leader Mitch McConnell after this week’s failed votes. “There’ll be additional discussions.”

The developments come a day after Democrats stifled an attempt by Senate McConnell, R-Ky., to rush a $250 billion infusion into the business program — just in its infancy and beset with hiccups as it starts up — by a voice vote.

McConnell then blocked Democrats’ demands to add an additional $250 billion for states and hospitals.

The stalemate hit as the nation’s jobless soared past 16 million.

Congress is in an unprecedented situation in which convening either chamber to do business as the nation is locked down by the coronavirus pandemic. That means legislation has to advance by consensus, without roll call votes.

Both parties support the paycheck program that funnels forgivable loans for shops to make payroll during the shutdown. Treasury says the program will soon run out of cash.

But Democrats say they want safeguards to ensure lending reaches all eligible businesses, including those that do not have established credit relationships with banks such as minority-owned firms.

Pelosi told Mnuchin the busines program “must not solidify the disparity in access to capital faced by many small businesses,” her spokesman Drew Hammill said Friday.

Pelosi and Schumer are pressing to add funding for health care providers such as hospitals, as well as further funding for cash-poor state and local governments.