Trump moves to blunt coronavirus’ heavy impact on US economy 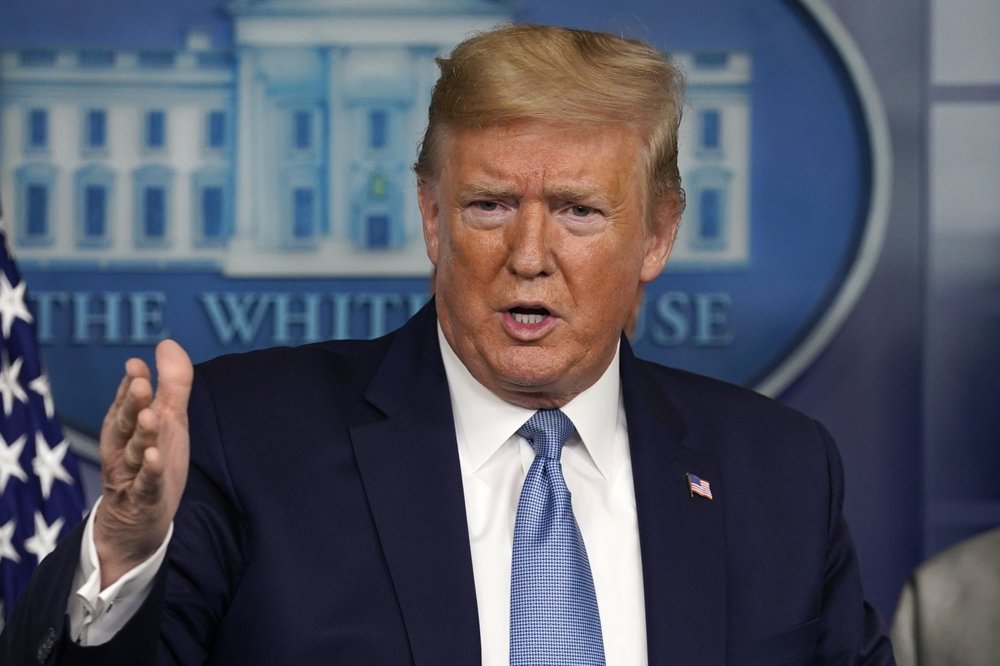 US President Donald Trump speaks during a press briefing with the coronavirus task force, in the Brady press briefing room at the White House, Monday, March 16, 2020, in Washington. (Photo: AP)

Ahead of an expected surge in coronavirus cases, US President Donald Trump on Tuesday moved to blunt the impact of the pandemic on the US economy, fundamentally altered by a push for a nation to stay home.

As the global markets fluctuated amid fears of a recession, the president conferred with tourism executives as well as restaurant leaders, retailers and suppliers. His administration is expected to propose a roughly $850 billion emergency economic stimulus to address the free-fall while considering checks to American workers trying to make their way in an economy deeply unsettled by the outbreak.

US businesses large and small are reeling from shutdowns, cancellations and public fear about the virus as the number of cases rises nationwide. Stocks moved higher on Wall Street on Tuesday, a day after plunging to their worst loss in more than three decades.

And the president again urged Americans to follow sweeping guidelines that for the next 14 days will temporarily rewrite the norms of society, including for older residents to stay home while all people should avoid gatherings of more than 10 and their local restaurants and bars.

Trump, maintaining his newly somber tone about the crisis enveloping the globe, urged Americans to work from home and urged the nation’s cities and states to issue restrictions to promote distancing in line with new federal guidelines. He promised a dramatic increase in access to coronavirus tests, ventilators, hospital beds and access to telehealth services. His administration said it would coordinate responses with the states, would push for construction workers to give masks to health care workers and, if needed, use the Army Corps of Engineers to build more hospital space.

Treasury Secretary Steve Mnuchin, the administration’s lead negotiator with Congress, said tax filings could be delayed and vowed that the stock markets would remain open but their hours could be shortened. Officials said assistance could be offered to the airlines, cruise ships and airplane manufacturers. The president vowed to maintain the safety of elections while voters in three states went to the polls Tuesday even as Ohio postponed its primary.

Trump vowed that the virus, an outbreak like the nation has not seen in more than a century, would be defeated.

“One day we’re going to stand up here and say ‘We won,’” Trump told the White House briefing where reporters sat in alternating seats to maintain a safe distance. “As sure as you’re sitting there we’re going to say that.”

The president’s declaration of resolve came a day after, for the first time, he acknowledged that the pandemic may send the economy into a recession and suggested that the nation may be dealing with the virus until “July or August.” The president and his team on Tuesday cautioned Americans to prepare for a lengthy change to their daily routines as it could be more than a month before the impact of his 15-day guidelines can even be measured.

Trump said his coronavirus task force had considered, but was not ready to implement, any sort of domestic travel ban but he urged Americans to forgo trips even to places not heavily impacted by the virus saying, “Enjoy your homes, enjoy your living room.”

Dr. Deborah Birx, who is coordinating the federal response to the virus, on Tuesday called for the “army of millennials” to lead the charge in fighting back against the coronavirus.

Birx told ABC’s “Good Morning America” that the nation needs millennials out doing everything they can, including staying home from bars, to protect themselves from getting infected but also safeguarding their parents and grandparents. She said most millennials who get infected will have mild symptoms and are not as at risk as older Americans. Millennials, a term referring to those born in the 1980s to early 1990s, also tend to be good at networking and sharing information, Birx said.

Trump’s tone Tuesday was far less optimistic than his earlier predictions, when he insisted it could be over in weeks.

His admission that the outbreak may send the economy into a recession was startling for Trump, who for two weeks had struck a discordantly optimistic tone about the pandemic that endangered his presidency. This week, that upbeat demeanor was gone as he acknowledged the virus was “not under control” in the United States or globally.

First lady Melania Trump took to Twitter to urge Americans to consider “taking advantage of time working from home to connect with your loved ones via email or FaceTime.”

Trump’s daughter Ivanka posted a photo on Twitter of a makeshift tent built with bed sheets to allow her and her young children to “camp out” in the living room. She urged others to share indoor activities that home-bound parents can do with their children, many home due to school closings.

The expansive guidelines were issued on a day of fast-moving developments in a capital resplendent in cherry blossoms but awash in anxiety.

Senate Majority Leader Mitch McConnell said the upper chamber would stay in session until an aid package was passed. The Supreme Court said it is postponing arguments for late March and early April because of the coronavirus, including a round over subpoenas for Trump’s financial records. The last time oral arguments were postponed was in 1918, due to the Spanish flu epidemic. In 2001, they were relocated, but not postponed, after an anthrax scare.

Within the White House, the pandemic altered daily life.

Everyone who entered the complex was screened for a fever, and reporters were spaced out in the briefing room to reduce the chance of spreading the virus. And the outgoing acting chief of staff, Mick Mulvaney, isolated himself in South Carolina as his niece, who had flu-like symptoms and lives with him in Washington, awaited test results to see whether she has the virus. Mulvaney has tested negative but was isolating himself “out of an abundance of caution due to his proximity to the President,” White House press secretary Stephanie Grisham said.

The vast majority of people recover. According to the World Health Organization, people with mild illness recover in about two weeks, while those with more severe illness may take three weeks to six weeks to recover.