BUSINESS Trump’s China delegation: Who’s on the plane to Beijing?

Trump’s China delegation: Who’s on the plane to Beijing? 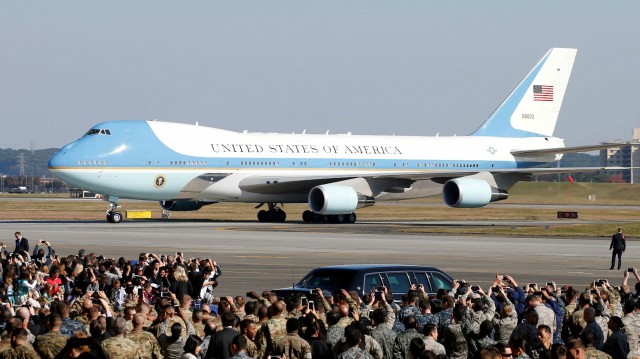 Almost a year after the 2016 US presidential election, Donald Trump will arrive in Beijing on Wednesday for talks with President Xi Jinping that are expected to focus on the Democratic People's Republic of Korea (DPRK) and trade relations, while commercial deals could also be announced.

The make-up of the delegation joining Trump in Asia will vary from country to country, but media reports suggest the individuals below will be in China from November 8. What do the people who are – and aren’t – coming to Beijing suggest about the US president’s priorities?

Ross is understood to have played a central role in preparing the US trade strategy for the China trip and will lead a high profile business delegation.

Beijing is the only leg of Trump’s five-nation Asian tour that the commerce secretary is expected to attend. On Monday he hit out at perceived trade imbalances, telling CNBC: "The EU, China and Japan all talk about free trade and they all practice protectionism.”

Miller has a broad remit, and is known as a close ally of former Trump aide and economic nationalist Steve Bannon.

Two economic big hitters, Cohn and Mnuchin, are staying in Washington to press ahead with the Republican tax plan. A less-known but notable omission from the list is Navarro, the director of the White House Trade Council who has fiercely criticized China’s trade practices in the past.

Leading figures from 29 major US companies will be part of a trade mission led by Ross, according to Reuters. The commerce secretary said ahead of the trip that the group will be seeking “immediate results” and “tangible agreements.”

Alaska Governor Bill Walker has confirmed that he will travel to Beijing. Walker, whose state is making plans for a 43 billion US dollar gas-export project, played host to Xi in April when the Chinese president had a brief stopover in Anchorage after meeting Trump in Florida.

Executives from major players, including Goldman Sachs, General Electric and Boeing, are also set to make the trip to Beijing. Qualcomm, the chipmaker that received a 103 billion US dollar takeover offer on Monday, is one of the few US tech companies expected to be represented.

Grain company Archer Daniels Midland and agribusiness firm DowDuPont are on the plane. Ten of the 29 firms represented operate in the energy field, including companies specializing in liquefied natural gas.

Trump is determined to form a unified, hardline stance to increase pressure on the DPRK, and two big hitters – McMaster and Tillerson – will join him in Beijing. The US president kept up strong rhetoric against Pyongyang in Japan and S. Korea, and on Monday requested an extra four billion US dollars from Congress to counter the threat posed by the DPRK.

Mattis will remain in the US after conducting a recent tour of Asia, while McMaster is understood to have been instrumental in planning the Asia trip. Tillerson, who is reported to have had a tense relationship with the president in recent weeks, has previously urged a diplomatic solution to the DPRK tensions.

The standout omission from the Trump delegation is another Trump – Ivanka. The president’s daughter and advisor has been in Asia over the past week, but is expected to return to the US to push for the Republican tax reform bill to be passed. Her husband, Jared Kushner, played a central role in planning the Xi-Trump meeting in Florida in April and is expected in Beijing.

Kelly has attempted to professionalize the White House operation since becoming chief of staff, and his disciplined management style is expected to be on show during the trip.