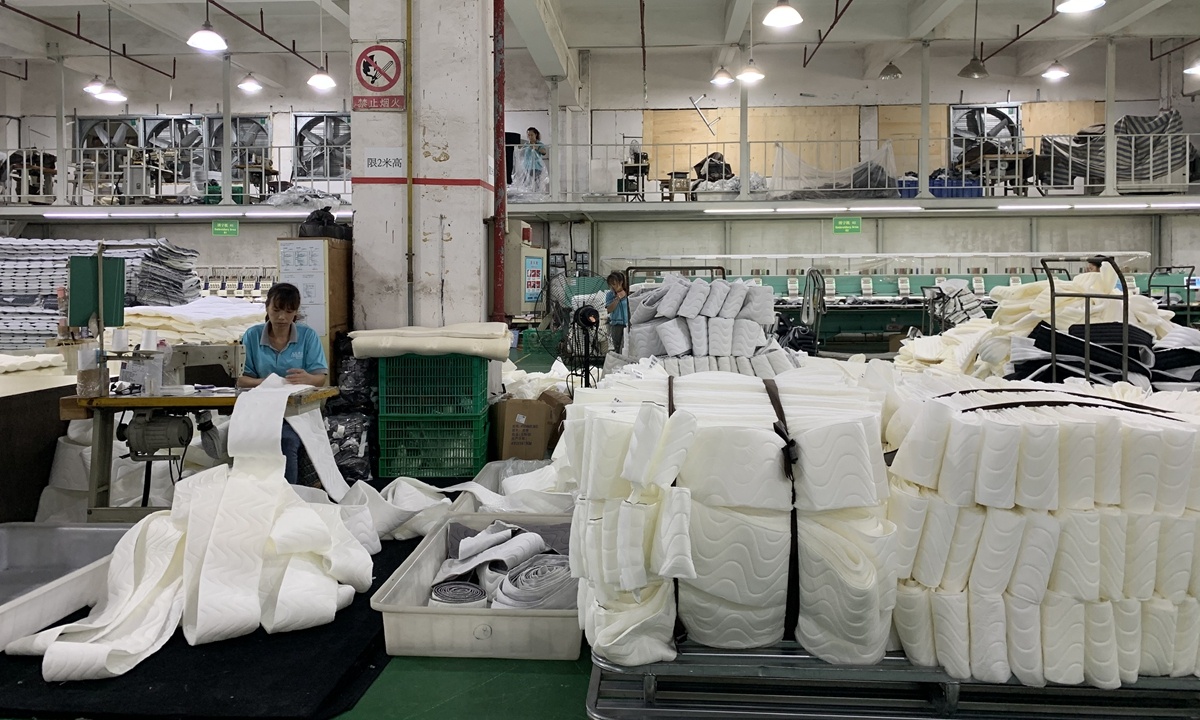 All employees at a Taiwan factory in Dongguan, South China's Guangdong Province, which produces furniture and mattress, have returned to work as China fully contained coronavirus epidemic. (Photo: Global Times)

With China's irreplaceable industry chains and unshakeable US demand, decoupling from China is just political talk by US President Donald Trump, which is not a workable plan, representatives from China's manufacturing sector told the Global Times.

With deteriorating ties between the world's two largest economies, Trump has vowed to decouple the US economy from China - an act mostly perceived as a political move to gain ground for his presidential reelection bid.

However, bilateral trade data, and comments from Chinese manufacturers ranging from sporting goods producers to commodity exporters, show US demand for Chinese good remains strong, and it is unrealistic to decouple the two economies, even if orders from some sectors have fallen.

As Christmas season is approaching, which is normally a peak season for Chinese factories, many companies started to speed up to meet production targets - even though this year is not as busy as usual due to the coronavirus pandemic - and US reliance on made-in-China products remains strong.

Chen Junyan, a manager of Advanced Group, a Taiwan-funded golf club producer and exporter located in Dongguan, Guangdong province, told the Global Times that despite the decoupling move and the pandemic, orders for the company's products, which are excluded from the US tariff list, have risen steadily and orders in September witnessed a 10-percent increase year-on-year.

"Strong demand from the US poses a hurdle for the US President Trump, whose golf clubs are probably made in China," said Chen, whose company gets 50 percent of its orders from the US.

Exports to the US have picked up slightly and the main increase comes from online channels such as Amazon, Hu Shunliu of Haobei Arts & Crafts Co - a commodity exporter in Yiwu, East China's Zhejiang Province - told the Global Times on Monday.

"Clients held off placing orders until June due to the pandemic. However, after June, most orders started to come in, and most of those have been shipped," Hu said.

Despite those increased orders, not every company has been so lucky.

Botex Manufacturing, which makes gloves, hats, scarves and indoor slippers, gets 60 percent of its overseas orders from the US. An official told the Global Times that it has seen a nearly 25-percent order decline from the US market since January.

But that's not because of any "decoupling" plan, Li Kitchi, general manager of Botex, told the Global Times on Tuesday.

"Due to the recession, our clients are not able to stockpile amid growing uncertainty, but their demand remains unchanged," Li said, adding that from his point of view, US demand for Chinese consumer goods won't end, given the high quality.

China-US trade data seems also to deal a blow to Trump's plan. According to US research company Descartes Datamyne, the number of 20-foot equivalent containers shipped from China to the US rose 19 percent in August from a year earlier to nearly 1.07 million, accounting for 63.4 percent of all shipments from Asia to the US.

China's irreplaceable industry chains are another reason that decoupling is likely to fail, these manufacturers said.

According to Chen, there are only four major golf club producers worldwide, three in the Chinese mainland and one in the island of Taiwan.

"One of our peers tried to set up a factory in Mexico years ago. However, it moved back in the second year, as many issues including cultural differences, language barriers, and insufficient raw material supplies were hard to address," Chen said.

According to Li, China's industry chains can't be replaced for 10 years, considering the easy access to raw materials and an efficient labor force, which can effectively lower the cost of goods.

"Even though some companies had to shift factories to some Southeast Asian countries such as the Philippines, Vietnam or Indonesia, to avoid the US tariffs, most of them are still buying raw materials from China, or even leaving the final assembly to overseas factories," said Li.

"The basic rule of manufacturing is to use every legitimate means to lower costs, and apparently the 'decoupling' plan violates the rule," said Li, adding that the plan is more like a political slogan than a realistic practice.