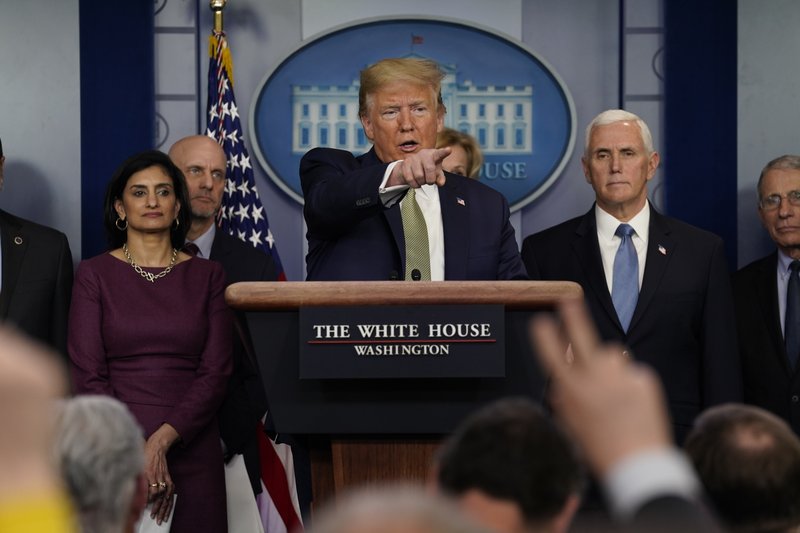 President Donald Trump speaks during a press briefing with the coronavirus task force, at the White House, Tuesday, March 17, 2020, in Washington. (Photo: AP)

US President Donald Trump is asking Congress to unleash a torrent of emergency economic aid — including direct checks to Americans — an effort unseen since the Great Recession to shore up households and the economy amid the coronavirus crisis.

Trump wants checks out to the public within two weeks as part of what officials said could approach a $1 trillion package. Congressional leaders vowed swift action. Treasury Secretary Steven Mnuchin appeared on Capitol Hill to brief Senate Republicans as state and local officials acted more forcefully to restrict gatherings and mobility in the face of growing sickness.

“We want to go big,” Trump said at a White House briefing. “We want to get it done and have a big infusion.”

Senate Majority Leader Mitch McConnell promised the Senate would not adjourn until the package was passed.

“Obviously, we need to act,” McConnell said after meeting White House officials at the Capitol.

But first, McConnell said, the Senate will vote on the House’s $100 billion package of sick pay, emergency food and free testing that’s on track for Trump’s signature.

After a savage drop at the start of the week, the stock market rose during Trump’s briefing as he and aides sketched out elements of the economic rescue package.

Bigger than the 2008 bank bailout or the 2009 recovery act, the White House proposal aims to provide a massive tax cut for wage-earners, $50 billion for the airline industry and $250 billion for small businesses.

Two people familiar with the request described it to The Associated Press on the condition of anonymity because they weren’t authorized to speak publicly.

“It is a big number,” said Mnuchin, exiting a briefing of Senate Republicans. “This is a very unique situation. We’ve put a proposal on that table that would attract a trillion dollars into the economy.” One GOP leader, Sen. John Thune of South Dakota, told reporters afterward it “could be” up to $1 trillion.

“A lot of our members believe that we need to be bold and big,” Thune said.

Senate Democrats produced their own $750 billion proposal, which includes $400 billion to shore up hospitals and other emergency operations in response to the global pandemic and $350 billion to bolster the safety net with unemployment checks and other aid to Americans, according to Senate Minority Leader Chuck Schumer’s office.

House Speaker Nancy Pelosi and the chairman of the House Transportation Committee, Rep. Peter DeFazio of Oregon, spoke by phone with Mnuchin in the morning. The Democrats “emphasized that protecting workers’ paychecks and benefits was their top priority, and that immediate action was needed,” said Drew Hammill, Pelosi’s spokesman.

Congress was being asked to approve the most far-reaching economic rescue package since the Great Recession of 2008.

It’s an enormous political and economic undertaking as a slow-moving Congress tries to rise to the occasion of these fast times.

“There’s great spirit” among lawmakers, Trump said. “I can say that for Republicans and Democrats.”

The debate is sure to revive the sharp divisions over the costly bank bailout and economic recovery of the Obama and Bush era. Particularly striking is McConnell’s urgency after having adjourned the Senate over the weekend while Pelosi muscled through an aid package.

Some GOP senators were skeptical about the massive aid on the table. “I’m going to be very leery of doing something like in 2008,” said Indiana Republican Sen. Mike Braun.

But the other senator from Indiana, Todd Young, chairman of the Republican Senate campaign committee, said he was open to approving $1,000 checks and wants aid out the door as as soon as possible. He noted the sudden change of American life, and said he was the only passenger on his flight back to Washington.

Angry senators from both parties boarded planes returning to a changed Washington, as Trump declared a state of emergency, the virus spread and the economic free-fall worsened. Despite federal guidelines against so many people gathering, senators had no choice but to convene. Legislating cannot be done from home. The House is on a recess.

The White House hopes the measure will pass quickly, possibly this week, as the administration scrambled to contain the economic fallout of the outbreak.

The new proposal is beyond the House’s estimated $100 billion aid package of sick pay, emergency food aid and free virus testing that was approved over the weekend and is pending before the Senate.

Now Congress will be rushing to pass two measures or combine them into one, altogether a sweeping response.

Muscling the aid will test Congress and the White House at a pivotal moment in the crisis and in an election year when the two parties have vastly different outlooks on the best way to prop up the economy and help Americans.

At the start of the month, Congress approved $8.3 billion in initial aid. Trump quickly signed into law the measure, which provided federal agencies money for vaccines, tests and potential treatments, and funding to help state and local governments respond to the threat.

During the recession, the American Recovery and Reinvestment Act of 2009, passed in February of that year, had an initial price tag of $787 billion which was revised later to $831 billion. That was under Barack Obama.

The Tarp passed in the fall of 2008 to help troubled banks had a price tag of $700 billion. It was put together by the George W. Bush administration, and provided money for the auto bailouts for General Motors and Chrysler. All of that money for the banks and the auto companies was paid back.

Now, Republicans often reluctant to spend federal dollars did not flinch at the head-spinning number, as a roster of America’s big and small industries — airlines, hotels, retailers — lined up for aid.

Sen. Mitt Romney, R-Utah, called for sending $1,000 to every adult American — an idea the White House now is proposing, though not necessarily that sum.

Industries representing a broad swath of the economy are seeking help in withstanding the fallout as schools close and Americans are being told they should stay inside, skip nonessential travel and avoid gatherings with 10 people or more.

That means no dining out, no boarding planes, no shopping the malls as a great national shutdown sparks business closures, layoffs and lost paychecks for rents, mortgages and everyday needs.

The nation’s largest business organization, the US Chamber of Commerce, asked the Trump administration and Congress on Monday to act rapidly to help companies have access to cash and avert a “potentially devastating” hit to the economy.

Pulling together the new package will challenge the basic logistics of governing as Congress itself struggled to adapt to the new normal.

House Democrats were told on a conference call they won’t be recalled to Washington until the next package is ready for action, according to people familiar with the call but unauthorized to discuss it and granted anonymity.